The Bitterwood Posts: The Burnt Moon 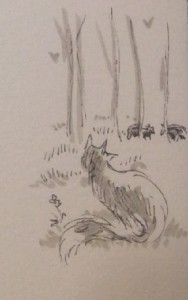 In “The Burnt Moon” I wanted show a bit of the history of the ex-Abbot Adelbert (when he was still Abbot of St-Simeon-in-the-Grove) and of Larcwide the Librarian. I wanted to give readers more information about Gytha and her mother than Gytha ever got. In so many books all the mysteries are solved – but real life isnât like that. Much of the time, secrets are held close and taken to graves. If youâre lucky, a trace has been left behind; if youâre lucky and clever then you might be able to track down the puzzle pieces and put them together. Maybe theyâll form a full picture, or maybe itâll be a mosaic, with fragments and shards, and voids where things are missing.
I liked the idea of having a plague of rats to continue the Pied Piper echoes started in âThe Maiden in the Iceâ, and I especially liked the idea of a character telling lies that later turned out to be true, even though he didnât know it. 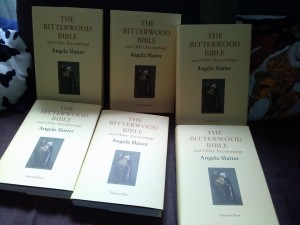 giddy-headed girl, then fanned until the larger branches and logs caught. Until the flames flicked and licked at her toes, the soles of her feet; until they engulfed the ankles, calves, knees, thighs, the belly so recently flattened, up, up, the stomach, the breasts, the shoulders, neck and finally the head with all its lovely golden hair. And Hafwen, fair summer, was gone, cindered and sundered.

But thatâs by the by. The story doesnât start there, not with the rats, nor even with poor Hafwenâs incineration. The story begins a whole week before the funeral pyre was sparked.
The story begins, as all good tales do, in a tavern with a kilderkin of mead, two monks speaking of foxes, and a wager.