The Bitterwood Posts: The Night Stair

In 2012, my Significant Other and I were travelling around the UK and we visited Battle Abbey where the Battle of Hastings had taken place. We wandered through the ruins and one of the signs pointed out the night stair that the monks had taken when going to early services. I just loved that name and thought it sounded positively sinister. Where might it really lead?

I carried that around in my head as a title for the better part of a year until I started thinking about a vampire tale for Bitterwood. I could see Adlisa standing in the selection line, waiting, hoping to be chosen, not for a perceived better life, but so she could act, find the truth, and, with any luck at all, get revenge. But, as always, thereâs a sting in the tale. Sheâs another character I want to revisit later, as Adlisa the Bloodless – sheâs already got a mention in the new collection, The Tallow-Wife and Other Tales, and I hope to expand on that some time in the future. 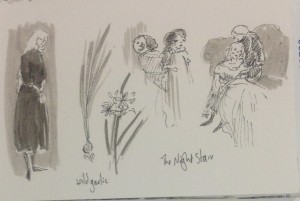 The Steward is a tall man, entirely bald, gaunt in the face, yet rotund in the belly. His legsÂ  in their loose fawn linen trews, look like a scarecrowâs, sticking out under the awning of his gut â perpetually in shade perhaps they donât get enough light to grow. His tunic of padded green silk, his sable wool coat with its thick fur collar, are too warm even for the end of summer, but as marks of his office, must be seen, just like the yellow crystal hanging about his neck. Called the âStewardâs Gazeâ, itâs the size of the top joint of a manâs thumb, and has passed from incumbent to incumbent for as long as anyone has the will to recall. He puts it in his mouth and sucks hard when he thinks no one is watching. Itâs worth a kingâs ransom, and Iâll warrant the gold chatelaine belt around his waist could buy the cityâs food for half a year.

His finery makes me aware of the state of my black dress â not that itâs poor or made shiny by age, but it belonged to others before me. Both my sisters â my only full-blood siblings â wore it to their own choosing. I am certain I can smell them, their scents imprinted into the warp and weft of the fabric despite washing. The colour makes my skin paler, my eyes bluer, provides the perfect background for the tresses, which pour down my back like gold fresh from the smelter. I was careful, so careful with my toilette: brushing my hair, one hundred strokes; rubbing the cream that was my motherâs (comfrey and rose to soften and plump, a little lemon balm for lightening) into my skin; drops of eyebright to ensure my gaze is clear. I refrained from pinching my cheeks â pale is best â but I did nip gently at my lips, to carmine them a little, so it seems as if all life is concentrated there. I will not be found wanting.

I stand in line with seven other girls who have been presented this day. We are of an age, none more than sixteen springs, and there is only one of them, perhaps two, who might outdo me. To my right is Essa, with her milky skin and eyes like the sky reflected in ice, hair bright platinum; even her nails seem to have a silvery sheen. She watches me from the corner of her eye, just as I watch her.

To my left is Dimity, whose eyes are bright green, her cheeks with the tiniest hint of pink. She keeps her regard firmly fixed upon her own feet. Our Lady best likes girls who resemble herself; that is not Dimity for all her snow-washed whiteness â the eyes are all wrong and the eyes count.

So, Essa. Essa is the one to beat â the Steward will surely select between the two of us. 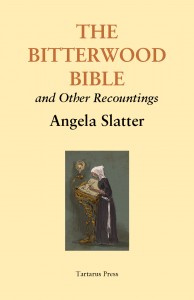 Filling this large room in the city hall are parents, including my father, whoâs left the running of the mineâs smelter to his deputies so he can see what deals might be struck. Behind him are three of my younger half-siblings, those not yet old enough to be exhibited, but deemed mature enough to watch proceedings in order to learn how to behave when â if â their time comes. Another ten still wait at home; not all will be offered, only those whose appearance is right, those whose behaviour does not mark them out as more trouble than theyâre worth. My father has twice made a small fortune from this process and I imagine he hopes to again â his tendency for taking new wives, sometimes before the old one is done, and his proclivity for procreation, his personal fecundity, constantly require more funds than his well-paid position provides.

Steward Oswain walks slowly up and down our line, as if inspecting troops. His brown eyes are considering, patient, although a little uncertain, as if offered several courses at a banquet and told he might only have one. He stops in front of the Toop girl and shakes his head (anyone can see sheâs too fat), then the Ansible twins (hair too dark), and then Mistress Garranâs girl (whose neck is smudged by a red birthmark); a dismissal for each. At the back of the crowd I hear a woman crying; she is shushed and hustled out â I cannot tell if her weeping was of relief or despair. The desperate whirring of my own thoughts is far too loud.

I straighten my shoulders, lift my head a little higher, blink quickly so that tears of fear do not start and cause the coal-mascara on my lashes to run. The Steward takes one more pass; another. He stops in front of Dimity â Dimity! â puts a finger under her chin and makes her look at him. Her lips tremble; he smiles kindly and nods. Essa makes a noise, and this one I know for relief. The Steward steps back, turns away. All scrutiny has left us. Parents mill around the tall stork of a man to strike bargains; Dimityâs mother to get the highest price, the others to find out when there might be another choosing â as if the Steward can predict Our Ladyâs moods to a day and date! Only my siblings still watch, their eyes fastened onto me as if by hooks.

Dimity takes her first step forward as a chosen girl and I trip her. Essaâs intake of breath is sharp. The green-eyed maiden falls so fast, is so surprised, that she does not put her hands out to save herself. Her face meets the floor with a satisfying crunch of bone and cartilage. There is that tiny broken moment when nothing happens, no one moves, when time is divided into before and after, then, as if a clockâs hands click over, everything starts again, and the girl on the floor wails. I do not move.

Dimity sits up, blood pouring from her ruined nose. She stares at me all uncomprehending, hands twitching as if to point me out, but she catches my glance and I can see her crumple inside. She sobs a little more quietly and when an adult asks what happened, she answers with âI fellâ.

She will thank me; or rather, she would if she thought about it.