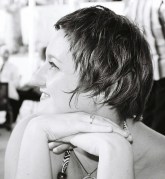 Jodi Cleghorn won this year’s Kris Hembry Encouragement Award at the Aurealis Awards ceremony in May – yet another sign, if one was needed, that’s she’s becoming a force to be reckoned with in the Australian writing scene. She is one half of an indie publishing house run by writers, for writers eMergent Publishing (along with Paul Anderson), and also runs the Write Anything site. She left her former life in magazine publishing in 2008 in order to spend more of her time writing … then the idea for what eventually became eMergent Publishing hit. So far, the press has produced the Chinese Whisperings series of anthologies, One Hundred Stories for Queensland, Emma Newman’s From Dark Places, and the Literary Mix Tapes.

1. If I wasn’t a writer I would …
â¦be in a rock band (or Iâd have finished my psychology degreeâ¦ but letâs stick with the rock band!) Iâve heard so many writers talk about their dreams of wanting to play in a band, that there has to be something to the lost dream of rock stardom. As I really canât sing and my piano playing it pretty abysmal these days, itâs a good thing I count writing as one of my literary adventures.

2. The inspiration behind eMergent was …
â¦ to see if a crazy idea for an interconnected short story anthology with multiple authors would work in practice. eMergent grew firstly by chance out of the Chinese Whisperings anthology idea, secondly with lots of hard work and thirdly with the good will of a bunch of talented writers who took a chance on our crazy ideas. The driving force behind eP is still three fold, but it has evolved a little since 2008. Now we aim to give emerging writers 1. the chance to work collaboratively with other writers; 2. the experience of working closely with an editor; and 3. offer unique publishing opportunities. In the future we hope eMergent will become a hub for all types of creatives to come together; to meet, mingle, share ideas and ultimately collaborate â writers of all ilks, photographers, artists, musicians, film makers etc. Weâre one step closer to seeing that dream eventuate as we work with US indie film maker Devin Watson at adapting some of the Literary Mix Tapes stories into short films with a group of emerging film makers and giving LMT writers the chance to learn script writing skills.

3. A war starts: tree-books -v- ebooks. What happens?
They lay down their weapons because they know itâs not one versus the other, itâs just a storm of propaganda run by spin doctors on behalf of people who think theyâve got something important to lose. They agree to a literary version of world peace, whereby all kinds of books happily co-exist as complimentary to each other and work to educate the unwashed masses to adopt this philosophy. Then they pop the cork on a bottle of pink bubbles, put on bad eighties music and forget there was ever a problem because books just want to have fun.

4. You get to be your favourite fictional character for the day; you can go anywhere and anywhen. Discuss.
Iâd be Dr Who for the day â the first female Doctor. The day would begin with me going through the endless wardrobe on the Tardis to choose the perfect 1968 outfit, (in the hope that perhaps Joâs minis and long white boots might still be there!) First stop would be to Maine to collect my partner in crime Chris Chartrand (see weâve been plotting this eventuality for a while now and hopefully it would be in the correct timeline so I get my Chris!) And it would be onwards/upwards to Woodstock (to actually, honestly, really âbe thereâ) where Iâd get to hear Joe Cocker sing âWith a Little Help from My Friendsâ and see Jimi Hendrix play (and set his guitar on fire). Weâd try and stay out of trouble because I hate running, but things always go pear-shaped so guess thereâd be some running (which could be tricky in all that mud and Iâd quickly discover white was a really bad idea). As weâd be in possession of the Tardis, that would be just the start of it, as a 24 hour period in the world of Dr Who is the most malleable of concepts. My souvenir photo when I finally returned would be of Amy and Roryâs new bunk beds.

5. Donuts or danishes?
Danishesâ¦ though my mate Greg McQueen who lives in Denmark, says you have to have the real deal from a local Danish bakery. Apricot and custard. (Iâm still waiting and saving my dollars â as itâs not one of those things you can post!)