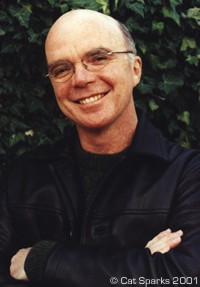 Australian author Robert Hood is a legend in zombie, giant monster and general horror circles. Why? Coz he just tells a damned good tale that will make the hairs on the back of your neck stand up and whimper. He has been tutored by Thea Astley at university, directed plays, been nominated for a variety of awards including Ditmars, AurealisÂ and aÂ Readercon award for best collection; and heÂ has alsoÂ two Atheling Awards for Genre Criticism in his treasure trove. His collections include Creeping in Reptile Flesh, Immaterial and Day-dreaming on Company Time.Â

Upcomings: publication of a zombie novella in Zombie Apocalypse! edited by Stephen Jones (Robinson UK and Running Press US, October 2010), and the novel Robot War Espresso from Twelfth Planet Press (probably April 2011) – which contains no zombies.

Here are his random answers to my random questions andÂ he interviews Batman. Huzzah!

1. Batman -v- a Zombie (just one, not a whole cluster): discuss.
To best answer this question, I interviewed Batman himself, asking him how he thought he’d fare against a lone zombie.

Batman: You’re joking, surely. Those shambling meatbags don’t stand a chance against me. I defeated a bunch of mutant zombies way back in 1940! I’ve had to deal with the Rainbow Beast, the Ogre and his brother Ape, Clayface, Killer Croc, the Man-Bat, Bane, and all sorts of slathering monstrosities — including huge robots, dragons, gods, demons and the like in the company of my Justice League buddies. That’s on top of endless mobsters and gun-toting bad guys with super-science weaponry. A lone zombie? Not a chance.

Rob: Even if he’s one of the fast variety?

Batman: Some of those villains I’m mentioned make a fast zombie look like a shambler.

Rob: But if the zombie got close enough to bite you…?

Â Batman: I wouldn’t let it, would I?

Rob: How would you stop it without getting close-up and personal?

Batman: One of these bat-blades!Â

Batman: Oops! Sorry about your hand. I’m sure Doc Strange’ll grow you a new one.

Rob: You know Doc Strange? But he’s part of the Marvel Universe, not DC.

Batman: We hang out sometimes.

Rob: Speaking of Marvel, all their superheroes got turned into cannibalistic dead in the Marvel Zombies franchise, I recall. Then they ate the entire universe. Zombie Thor would be hard to deal with.

Rob: But what if it happened in the DC Universe and you met up with a lone zombie that happened to be Zombie Superman? You’d be stuffed then.

Batman: That’s why I carry this bat-blade I created out of lumps of Kryptonite I had lying around in the Bat Cave. Want to check it out.

Rob: That’s okay. I can see it from here…

2. I first realised I wanted to be a writer when â¦
My English teacher would set a one-page story as a writing assignment and I’d regularly write 8 pages or so instead. The stories were always SF, fantasy or horror, too. I was unstoppable, whatever the topic. A key ego-establishing moment came when I wrote a story about an astronaut in orbit. He listens to radio broadcasts announcing the start of World War 3. The story ended with his realisation that there was no one left alive down there and that he was doomed to circle the Earth until his orbit decayed… My teacher made me read it to the class (thus, embarrassing the hell out of me) and then commented: “I’ve always wanted to be able to write a story like that.”

Actually I probably decided I wanted to be a writer when I read H.G. Wells’ War of the Worlds for a library assignment in First Form, and loved it. That’s when I wrote my own invasion novel. The difference between them was that mine was crap. But within a few months, I was getting rejected by Galaxy Magazine in the States….

3. The book I most wish Iâd written is â¦
The Strange Case of Dr Jekyll and Mr Hyde. Or something that tells an equally iconic story. Frankenstein. Dracula. Hey, War of the Worlds for that matter.

4. What is the optimal number of zombies for a novel? And for a short story?
There’s two answers to that. Firstly, there’s no optimal number as long as there’s an endless stream of them. The flesh-eating type functions best in a crowd. Zombies are oddly social monsters, considering bits of them tend to drop off at parties.

Secondly, there’s definitely a place for single zombies, particularly when defined as re-animated dead of a more traditional kind — deceased individuals seeking vengeance for wrongs done them… that sort of thing. These ones are like corporeal ghosts — symbols of the angry or guilty past that can’t be laid to rest easily.

I don’t think novel or short story makes much difference, though the single zombie might work best in short stories. Still, I’ve written several zombie short stories of the apocalyptic kind. And an as-yet-unpublished novel with only one or two.

5. Donuts or danishes?
Well, in reality, my answer would have to be “neither”. I have an annoying gluten intolerance, unfortunately. If I could though, I’d go for a Danish. After all, policemen eat donuts, but zombies eat Danes.

His website is hereÂ and includes the soon-to-be-legendary-if-it-ain’t-already Undead Backbrain.