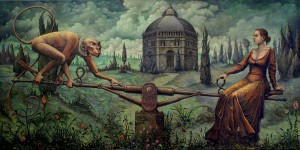 Hard at work on my Spectral Press novella, The Witch’s Scale, purely because the idea sprang forth fully formed the other week. It details an episode in the history of Patience Sykes (one of my favourite characters) in between the action of “Gallowberries” and “Sister, Sister” in Sourdough and Other Stories. Selke from “A Porcelain Soul” gets a look in too!

Thereâs a doctor comes once a month from the bigger city three towns over, to do his rounds, but Iâm the one who lives here and can be found day or night. Iâm the one the Eddaâs folk turn to for everyday remedies, and I am the one that many come to even when Doctor Herbeau is visiting. Yet I harbour no illusions: I am tolerated. If a physician deigns to make his home here, then I shall become something of an embarrassment, an object of superstition, and a reminder that theyâve held to the old ways. A medicinal man will spout fancy terms they do not understand at his patients, patronise them, and hand out tablets that give a little relief, but no cure. They will worship his impenetrability as a sure sign of superiority and keep running back and back again for his expertise. My honesty about what I can and cannot do will no longer suffice. I make no promise of miracles for I know all too well that Dame Fate has a penchant for making a liar of the best intentioned individual. A doctor with his empty vows will steal their hearts and hollow heads from me, and theyâll dismiss from memory the times I saved their children from fever, or gave elderly parents a balm against lingering disease. The women will choose to forget that Patience Sykes made their barren wombs a little more welcoming for their husbandsâ seed, and those same husbands will forget that my potions made them able to service those very wives.

It has happened before and Iâve no doubt it will happen again. For now I am comfortable and content, though I keep a weather eye out.

I tread carefully down the slope, and kneel at the waterâs edge. Reaching into the cool liquid makes me shiver though the day is more than warm. I pluck out handfuls of the waterweed that grows there. My house guest asked for it, though I donât know what itâs for. Her knowledge is different to mine and Iâll ask her how to use it, then write it down in the book I keep wrapt and buried in the cellar. I pick more, shake away the excess water, and put it in my basket next to the nightshade and mushrooms, the angelica, rue, henbane, wood sorrel, mullein, willow bark, woodbine, and pepperwort.

On the surface floats my reflection; not so bad. Iâve just crossed to the wrong side of fifty but could pass for younger, with my clear green eyes, still-pale skin, and dark hair as yet untouched by white. There are fine lines, though, around my mouth, and across my forehead, which mother always claimed as a sign of intelligence. Her own brow was a maze of furrows, yet it wasnât enough to help her evade the men of Bitterwood when they hung her. Or tried to hang her.

I look past my own face, down into the depths, using the sight that was my fatherâs gift: the ability to not only see in the darkness as clear as day, but also to penetrate the earth and find what has been hidden. Thereâs a bundle, swaddled tight and weighted down with rocks. Itâs small, so small. A newborn, I suspect, and unwanted. Brought here by its mother most like. I imagine the smell of sour breast milk, untapped and curdling. No point in telling anyone; theyâd want to know how I saw it and answering that question would only lead to more queries best left unasked. Whoever put it here will torment themselves quite sufficiently. Besides, how am I the one to judge a woman who leaves a child behind?

I rise and climb to the top of the bank. Dusk is threatening. I give a high-pitched whistle, hear an immediate answering crash in the undergrowth to my right. Fenric comes bounding towards me, all thick golden fur, deeper on his legs and paws, and honey-brown eyes. He alone seems untouched by the years, his devotion to me undiminished. The great head pushes against my hand and I put the basket down so I may pat him thoroughly. A deep thrumming comes from his chest, almost as if heâs a cat in a dog suit, rather than what he really is.

I peer out in the trees, where forest shadows and shapes dance, move. Sometimes they are sharply in focus, but mostly not. Figures tall and short, adults and children. They are creatures not confined to the woods, though they seem to like it best here. Itâs well time to return home, before the sun sets entirely. What if I should recognise some of the shades drifting back and forth between the trunks?

Iâm not fearful, though I am cautious.

How many of those shades I might be responsible for is something I cannot calculate. Â

I retrieve my basket, tell Fenric to come along, and head back towards Eddaâs Meadow. Gilly will have supper ready soon.

This entry was posted in fairy tales, News and tagged A Porcelain Soul, Gallowberries, Patience Sykes, sister sister, sourdough and other stories, Spectral Press, The Witch's Scale. Bookmark the permalink.