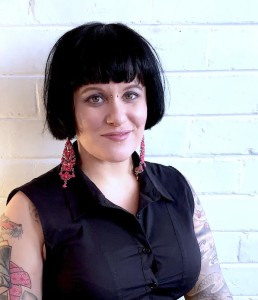 Marlee Jane Ward is a self-described writer, reader and weirdo from Melbourne, Australia. Sheâs a graduate of the Clarion West Writers Workshop and her debut novella,Â Welcome To Orphancorp,Â was one of three winners of Seizureâs Viva La Novella 3, and was a finalist for the Aurealis Award for Best Young Adult Fiction. It also, ahem, won theÂ 2016Â Victorian Premier’s Literary AwardÂ for Young Adult Fiction. Not too shabby.

Her short fiction has appeared in Interfictions,Â Terraform, Apex, Mad Scientist Journal, Slink Chunk PressÂ and the Hear Me Roar anthology. Today she takes some time out from living in Orphancorp to chat about the writing life.

1. What do new readers need to know about Marlee Jane Ward?

That I’m a total weirdo from Melbourne, and my coffee order is a large soy latte with one sugar, iced if it’s a hot day. That I don’t write to genres or age group, they kinda just happen to me. That I write the kind of stories I want to read, and that I hope you like them too.

I’ve wanted to write for a really long time. I always loved the creative writing sections in yearly tests and I’d get top marks. The first decently sized thing I wrote was a short horror novel called ‘Cracked’ as part of a creative program in year seven. It was both awful and derivative.

3. What was the inspiration for your novella Welcome to Orphancorp? 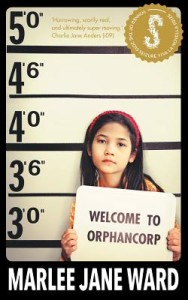 It came about as back story for a character in a different piece and I used it when I was desperate for ideas to take with me to Clarion West. It started life as a short story at CW, and I expanded it over six madcap weeks of conveniently timed unemployment for the Viva La Novella deadline. I referred back to articles I’d read on the Kids For Cash scandal in Pennsylvania and about Ceausescu’s Kids in Romanian orphanages. I’m an avid reader of longform articles and I get most of my inspiration from there. There was one bit in one of the articles about Romanian Orphanages that said kids who got any form of true loving support in their first year or few years of life, even if it was in the harshest conditions or terrible poverty, tended to be more resilient than the ones who didn’t. I thought Mirii might be like that. I needed to give her a stable base and some hope.

4. What appealed to you about the novella format? Is it a stepping stone to a novel length work?

I loved novella length as a way for me to warm up to novel-length work. I was a short story writer before this and I’m trying to learn to expand my ideas outwards into longer pieces. Short stories force you to pare everything way back and it’s been a learning curve to flesh things out. As well, I really like that if you are a fast reader like me, you can get through a whole novella in a sitting and experience it like a movie.

5. How did it feel to win theÂ  2016 Victorian Premiers Literary Award for Young Adult Fiction?

Bizarre. Like, my book? Little Orphancorp? I’ve got a healthy balance of confidence and self-doubt, so while I knew it was a bit of alright when it came out, I just thought there was too much stacked against it for it to win. Like, it’s 26,000 words, for one. It’s genre, for two. It’s got some pretty adult themes as well. But it just goes to show that the right 26,000 words, arranged in the right way and from the heart, can do all sorts of rad things. 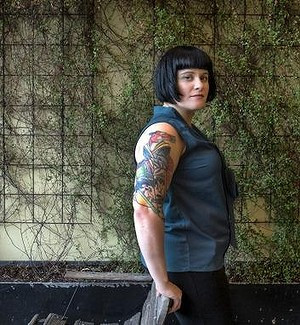 Stephen King can tell a hell of a story, Isobelle Carmody can craft a beautiful world, Poppy Z Brite can evoke every sense with her words. They were my early influences. More recently I’ve been really into Kim Stanley Robinson’s hope-filled futures, Neal Stephenson’s complex worlds, and the short stories of writers like Kij Johnson and Karen Joy Fowler. I’m also influenced by my peers, people like Jane Rawson, Patrick Lenton and Maria Lewis who are amazing at doing their own thing, and doing it well.

I’ll write whatever. I’m not the kind of person who sets out to do specifically this or that. I’m too much of a haphazard disaster for that. I tend to just consume a lot of books and a lot of articles and let the ideas I get from them swirl around until something pops out. Most often it’s a mix – a bit of a sciency dystopia or a bit of a horror-ish spec story.

8. What do you think was the biggest thing you got out of going to Clarion West?

An amazing group of friends. A glimpse of the life I want to lead, and the skills to get me there, if I keep at it. I’d do it again in a heartbeat, if they’d let me. Which they wonât – you can only do it once.

9. You get to invite five fictional characters for dinner: whoâs on the guest list? 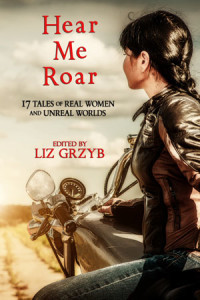 Hermione, but she’d give me pointed looks when things got to rowdy, no doubt. She’d be one of those people I think are really cool, but she’d think I was a mess, and that’s okay. Eddy Sung from Poppy Z Brite’sÂ Drawing Blood, so we could commiserate over all the queer boys we’d loved and lost. Zinzi December from Zoo City by Lauren Buekes, because we could relate with that whole ‘being ex-addicts’ thing, and she’d have the goss – plus I’d love to pat Sloth. Eliza from Neal Stephenson’s The Baroque Cycle, ’cause she’s so sharp and could teach me a thing or two. And maybe Alice from Stephen King’s Cell. She went through a lot in a short time, and could probably use a cuddle. This is my ‘all-lady, all the time’ version of the fictional dinner, you might notice. I dig hanging out with cool ladies.

10. Whatâs next for Marlee Jane Ward?

I’m almost done with the second OrphancorpÂ book, which is less about Orphancorp, and more the continuing adventures of Mirii Mahoney. I’d like the write the third one concurrently with the first in a new YA series, but we will see how that goes. Then I have a standalone adult novel that needs to get written – I’ve been thinking about it for a long time.