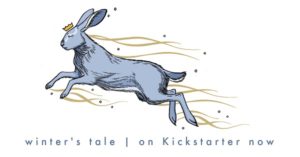 Winter’s Tale is the flagship title from Twelfth Planet Press’s new imprint, Titania. Written by Nike SulwayÂ  and illustrated by Shauna O’Meara, the Kickstarter is on right now and has some excellent rewards – go here and support it! Get an awesome book and other stuffs!

My dear friends Kate Gordon and Deb Kalin approached me with the idea several years ago now. They had been working together developing the idea of the imprint and its focus. Both Kate and Deb have early readers in their house and had spent several years reading to their young ones. Out of that experience, they both felt that there is a very real need for more diversity and choice within children’s books. That obviously sits well within the Twelfth Planet Press mission and thus was born Titania.

Kate and Deb fleshed out the imprint – naming it and approaching Kathleen Jennings to draw the Titania logo. They formulated the goals and objectives and once they knew what would be a Titania project, they then went ahead and approaching Nike Sulway about being involved. Nike wrote usÂ Winter’s Tale.

I matched Shauna O’Meara with Nike Sulway. As a publisher, I liked the freedom of choosing who the artist would be. I’d been wanting to work with Shauna for a long while and then this project came along and I realised she would really be the perfect fit for it. And she is!

Our focus is on offering children positive narratives with diverse characters.Â Winter’s TaleÂ features an agender protagonist, gay adoptive parents, girls being awesome at skateboarding and sports, and a diverse ensemble cast of supporting characters. It’s a long book for a picture book and it’s aimed at an older child-aged audience. That said, my three year old has loved it since the first copies hit my house so I think Nike is right in saying it will have broad age appeal and the narrative will deepen to the age of the audience.

Just around the corner we have a second Kickstarter crowdfunding project! We will be publishing a sequel to a really popularÂ Defying DoomsdayÂ anthology which featured disabled and chronically ill protagonists and heroes surviving the apocalypse. Editor Tsana Dolichva is coming on board again and bringing along Katharine Stubbs to coeditÂ Rebuilding TomorrowÂ which willÂ  be set further in post-apocalyptic futures when societies are working towards a new normal.Â Rebuilding TomorrowÂ will be an anthology of post-apocalyptic hope, and again centred on disabled and/or chronically ill protagonists. Writers will want to know that there will be an open reading period in January for stories. Because Defying Doomsday was so warmly received and so important to so many readers, I’m so looking forward to this sequel.