Yes, I know I should be working on the novel, but … 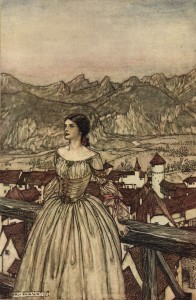 … “The Burnt Moon”, which is part of The Bitterwood Bible and Other Recountings collection is coming through quite insistently this morning, so I am going with that.

Here is the first snippet:

But that was three days after, three days after the fagots and sticks were lit beneath the giddy-headed girl, then fanned until the larger branches and logs caught. Until the flames flicked and licked at her toes, the soles of her feet; then they engulfed the ankles, calves, knees, thighs, the belly so recently flattened, up, up, the stomach, the breasts, the shoulders, neck and finally the head with all its lovely golden hair. And Hafwen, fair summer, was gone, cindered and sundered.

But thatâs by the by. The story doesnât start there, not with the rats, nor even with poor foolish Hafwenâs incineration. The story begins a whole week before the funeral pyre was sparked.

The story begins, as all good tales do, in a tavern, with two monks and a fox, a kilderkin of mead and a wager.

This entry was posted in fairy tales, News and tagged angela slatter, arthur rackham, bertalda, the bitterwood bible and other recountings, the burnt moon, undine. Bookmark the permalink.

2 Responses to Yes, I know I should be working on the novel, but …