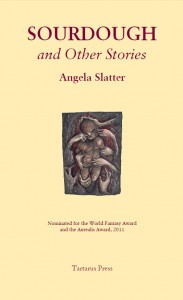 Sourdough and Other Stories, a finalist for both the World Fantasy Award and Aurealis Award for Best Collection, is published by Tartarus Press in the UK, with a beautiful (and creepy) cover illustration by Stephen J Clark. The limited edition hardcover has sold out, but can still be found with some individual booksellers or here. The paperback or ebook editions can be ordered here.

Sourdough has an introduction by Robert Shearman (Tiny Deaths, Love Songs for the Shy and Cyncial), and an afterword by Jeff VanderMeer (The Southern Reach series, City of Saints and Madmen, Veniss Underground, Finch, Shriek).

In the cathedral-city of Lodellan and its uneasy hinterland, babies are fashioned from bread, dolls are given souls and wishes granted may be soon regretted. There are ghosts who dream, men whose wings have been clipped and trolls who long for something other. Love, loss and life are elegantly dissected in Slatterâs earthy yet poetic prose.

As Rob Shearman says in his Introduction: âSourdough and Other Stories manages to be grand and ambitious and worldbuilding-but also as intimate and focused as all good short fiction should be . . . The joy of Angela Slatterâs book is that sheâs given us a set of fairy tales that are at once both new and fresh, and yet feel as old as storytelling itself.â

Publishers Weekly (starred review): ‘Australian author Slatter (Black-Winged Angels) displays a rare gift for evocative and poetic prose in this collection of 16 dark fairy tales featuring characters that will be familiar to readers of the Brothers Grimm, but themes (such as long-simmering vengeance and unnatural death) that push them out of the kids’ stuff camp.’

‘Slatterâs fairy tales have a ravishing quality which leaves the reader totally spellbound by their elegance and imaginative power.’ Mario Guslandi, Bookgeeks

‘Like Aickman, her sense of the fantastic serves to show us the weird world we hold within our own psyches.’ Rick Kleffel, American Public Radio Books