Of Sorrow and Such 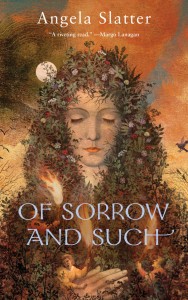 Of Sorrow and Such is from Tor.com’s new flagship novella imprint and is set in the universe I created for the Sourdough Cycle. It follows Patience, whose early life was introduced in âGallowberriesâ and whose later years were hinted at in âSister, Sisterâ (both in Sourdough and Other Stories). I always wanted to go back and explore what happened in between.

Also: Of Sorrow and Such won the Ditmar Award for Best Novella at Contact 2016, the annual national Australian Spec-Fic convention.

PRAISE FOR OF SORROW AND SUCH

“Of Sorrow and Such takes you to dark, unsettling places. Angela Slatter’s magic is earthy, bodily and beleaguered; in the hands of tough, clever Patience Gideon it’s a powerful instrument for wresting justice from a hostile world. A riveting read.” â Margo Lanagan, World Fantasy Award winning author of Black Juice and Sea-Hearts

“Of Sorrow and Such is Angela Slatter at her best. Characters and settings spring fully alive from the page, and the storytelling provides rich nourishment for both intellect and spirit.” â Juliet Marillier, Aurealis Award winning author of Dreamerâs Pool, and the Sevenwaters series

You can buy it here or ask politely about it in your local genre specialist bookstore (like Brisbane’s wonderful Pulp Fiction).