And Then interviews: Tansy Rayner Roberts 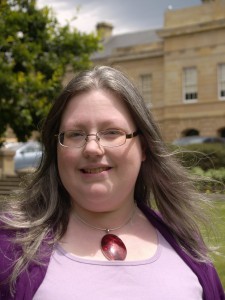 And our final And Then interview is with the delightful Tansy Rayner Roberts.

What inspired your tale?

I’d been reading about the history of the circus, and there’s something about the community of misfits with crazy, unreal talents that sparked the part of my brain that also loves superhero stories. And dragons. I had this very clear idea about two assassins who are trying to escape their former life by creating new, civilian identities… but actual normal life isn’t going to be something they can manage. Moving into a dragon circus and protecting it from its enemies, though, that’s something they can do.

The idea of stories revolving around pairs of heroes clicked immediately for me because I already had this circus idea burning a hole in my Scrivener file. I knew the story fit the concept, I knew it was going to be longer than a short story and crucially, the project gave me a deadline Â to make sure I got the story finished. 2015 has been a year of self-generated deadlines for me, so having an external date and someone waiting gave me the impetus I needed to dig in and write this particular novelette from beginning to end.

Oh I’m completely in love with the long-short form right now. I’ve always struggled to write at the short story length, and I’ve just come off writing the longest novel of my career – a book so long I had to divide it into two volumes. The story and character ideas I’ve been having lately are coming in character-rich scenarios that need at least 8-10 thousand words to explore and may well need multiple stories that connect to each other. And for getting published, there are a lot more opportunities at this length now (because of e-publishing) than there ever used to be. You get more character development in at the novelette-novella range, but without the need for a massive, all-encompassing plot structure.Â I’m actually starting a new podcast next year to publish serialised long-short stories (sometimes multiple stories with the same characters) because I like the form so much!

There’s always going to be a place for the anthology but I think more and more, the longer short story as an individual title (published electronically) is going to be key to authors building a reputation for themselves.

I’m launching my new podcast around February, I have a Victorian fairy novel to finish writing, and I am waiting to hear if my Musketeer Space novel (now two novels) finds A Publisher other than my blog. I also have the next in my murder mystery series coming out from Twelfth Planet Press later next year: Keep Calm and Kill the Chef.