Clarity + Specificity = Authority OR How to Make the Lie Work 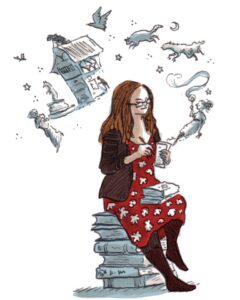 Thinky Thinkerton has booked the smallest room in Hotel Brain and has been contemplating authorial authority (yes, sheâs a nerd with a lot of time on her hands). Basically, Iâve been wondering this: how do you make your readers believe you?

I ask purely because as fiction writers we are, by our very natures, professional liars. To be a convincing teller of porkies in Real Lifeâ ¢, the best thing you can do is keep your untruths as close to the truth as possible. Creating giant fictions in which space monsters descended and ate your homework is unlikely to get any supporters. Any lie too complex to remember the details of will get you found out very quickly (mmm, perhaps this gives away too much about me.) But a piece of fiction, the kind that adheres to the page, is a complex lie. If your work involves dragons, pixies, wo/men from Mars, boy wizards, creatures from the dark side of the veil, anything out of the ordinary, how do you make that as close to the truth as possible?

Long answer: so what do you put in its place? How about authorial authority? Lots of vowels there, for which I apologise, and I guess itâs not the only answer but it is the one thatâs working for me at the moment.

How do you get your reader to willingly suspend disbelief? My clever writer friend, Brendan Carson (who lives at http://brendandcarson.blog.com/) pointed out at Clarion South recently that we (i.e. the people of our tribe: nerds, geeks,Â etc) are wonder junkies. Just like Mulder, we do want to believe â we are already predisposed to accepting the unbelievable. Start a sentence with âSo, thereâs this flying donkeyâ and when many others will step slowly (or quickly) away from you, the wonder junkies will narrow their eyes, consider you for a moment and say âOkay, Iâm listening.â So, how do you keep them listening/reading? How do you convince what is at once your most willing and yet most demanding and sceptical audience?

So, what gives your writing authority? What makes a reader think you know what youâre talking about? Well, itâs a mixed bag, but the two big things that stand out for me are clarity and specificity.

Clarity comes back to how you express yourself and knowing what you want to say in the first place. If your language is so flowery and adjectivally burdened that a reader feels like theyâre drowning in words then youâve failed. It takes a lot of skill and practice to make a baroque sentence work. If your words get between the reader and the ideas then your work lacks clarity â how can a reader believe your story (your âliterary liesâ) if you arenât granting them proper access? You can throw in as many lovely, elaborate words as you like, but if the effect is basically sewing sequins on top of more sequins then adding some ostrich feathers, a bit of brocade, dabbing on glitter-glue, some buttons, and some more sequins then youâd better make damned sure youâve enough skill to make that work â or just be heading out to Mardi Gras. Unnecessary words steal the clarity of your story; they obfuscate, pull a veil over your meaning and made a reader go âhuh?â Without clarity, your authority is in question.

Clarityâs best friend is specificity. Say what you mean, call a spade a spade, make your language clean and lean. Donât be ambiguous as a matter of course or because youâre lazy or because you donât know enough â an intelligent reader will know pretty quickly if youâre just making it up as you go along. Sometimes a paragraph (or indeed a page) of description may as well be replaced with [INSERT SPECIFICITY HERE]. Are you using too many words? Is there one word that will do the work of eight? Are you trying to describe a game of chicken between two strong-willed individuals? The word âbrinkmanshipâ can encompass everything you need and it can save you space on a page J. It also has a huge, rich pool of meaning under its skin and what it communicates to your reader is a cultural content that you may well lose by using a bunch of other words that almost get there but ultimately miss the mark.

One of my favourite books at the moment is How Not to Write a Novel: 200 Mistakes to Avoid at All Costs if You Ever Want to Get Published by Sandra Newman and Howard Mittelmark (Penguin, 2008). Itâs funny and clever and filled with practical advice. One of my favourite parts is extracted below because it demonstrates a lack of both clarity and specificity and shows how the writer is completely without authority. In fact, if authority was aÂ pair of trousers the author would be feeling a draft in the nether regions.

âNow that he had finally reached Paris, Chip understood why they called it the City of Lights. It was the lights! There was something special about Paris that was indescribable. It was so different than being back home in Terre Haute. There was something he couldnât put his finger on, a certain â¦ je ne sais quoi! He finally understood what they meant by that!

He bit into his Big Mac and, just as heâd always known it would, even a Big Max tasted different here â the difference was unbelievable! It was something he had entirely missed out on all his life â¦ until now. It was awesome.â (p.13 of How Not to Write a Novel, Newman & Mittelmark).

What has this told the reader? Paris, lights, Big Mac, indescribably different. Uh huh. Even the gentle reader will want her/his money back.

Why do we believe Neil Gaiman when he tells us a little girl has a talking cat and her parents have been kidnapped by a false mother with button eyes? Why do we believe Angela Carter when she tells us that men with eyebrows joining in the middle become werewolves? Or Jeff VanderMeer when he tells us that people are disintegrating into mushrooms? Â Or M John Harrison when he tells us that thereâs been an infinity of different space drives and they all really work just fine? When Joan D Vinge says thereâs a world with a poisonous atmosphere inhabited by bird-like people with vestigial wings? When MiÃ©ville casually drops in that criminals are punished by being remade either with grafted mechanical or animal parts? When Kelly Link tells us anything at all?

They have authority because their writing has clarity and specificity. We are convinced that they know what theyâre talking about. They have earned the right to tell us stories because they have convinced us that they are masters of their tale.