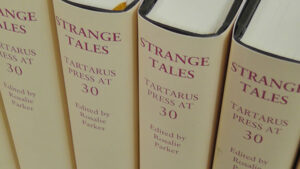 I’m absolutely delighted to have a story in the new anthology, Strange Tales: Tartarus Press at 30!

These eighteen entirely new stories have been brought together to  celebrate the thirtieth year of Tartarus Press. Representing the best contemporary writing in the fields of the literary strange, supernatural, fantasy and horror, they range from the wry comic fantasy of Jonathan Preeceâs âGreat Dead American Authors Alive and Living in Cwmbranâ, to the atmospheric horror of Andrew Michael Hurleyâs âHungerâ.

In âGrassmanâ by Rebecca Lloyd, two sisters come of age during a village ceremony, while in âMeikoâ by J.M. Walsh, a mysterious guest upsets the equilibrium of a country house party. Mark Valentineâs âOther Thingsâ documents the romance and strangeness of private lore, while the search for a missing girl leads to a sinister discovery in D.P. Wattâs âThe Wardian Caseâ. Dark family secrets are gradually uncovered in Angela Slatterâs âThe Three Burdens of Nest Wynneâ. 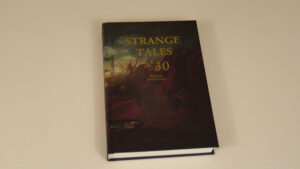 Founded in 1990, Tartarus Press has become known for championing both classic and contemporary writers. The stories in this volume sit proudly within that tradition.

You can pre-order here.