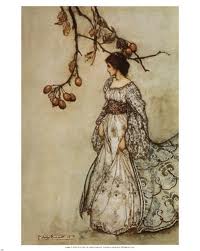 So today is my first day as a full time writer.

I’ve spent the last four days in a frenzy of sleep, reading, and playing so much Skyrim that it will be a fortnight before I can even look at an Eleven Warmhammer of Malediction again.

Today, I am ready, poised at the keyboard, coffee close at hand and the file open on the ‘puter. I am working on a short story called “By the Weeping Gate”, which is part of the follow up to Sourdough and Other Stories, The Bitterwood Bible.

Here is the start of “By the Weeping Gate”. It may change, but this is how it’s come out of the brain.

Â Â Â Â Â Â Â Â Â Â Â  The front stairs are polished daily by the girl who tends to such things (more of her later, just a little); the facade is cleverly created, a parquetry of stones coloured from cream through to ochre, some look as red as rubies, all creating a mosaic of florals and vines (the latter use malachite tiles). The windows are always clean and shine like crystals, but none may see inside due to the heavy brocade drapes hung within.

Â Â Â Â Â Â Â Â Â Â Â  Come to the door, look at its intricacies, all carved from ebony, bas-relief mermaids and sirens, perched upon jagged rocks with the sea throwing itself against those angles. The knocker is surprisingly plain, as if some tiny attempt at good taste was made; itâs merely brass (highly polished, of course), with a slight ripple through it so it looks something like a piece of rope.

Â Â Â Â Â Â Â Â Â Â Â  The house was not built by its current occupants â they have shifted into it, grown like a kind of hermit crab into a new shell â but by a sea captain who quickly made then lost his fortune to the ocean and its serpents and pirates, its storms and violent eddies, its whirlpools and deceptive coasts with rocks sewn just beneath the surface. After that, another man purchased it, a prince of the church, an infrequent visitor, who installed a mistress of surpassing beauty therein for some months, then took her away. The house lay dormant and lonely for several years until this woman came along.

This entry was posted in fairy tales, News, On Writing: General and tagged by the weeping gate, skyrim, sourdough and other stories, the bitterwood bible. Bookmark the permalink.

9 Responses to Day one, writer