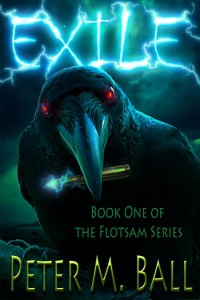 An embarrassment of riches! My friend and write club buddy, Peter M. Ball, has had his novella, Exile, released into the wild. You should read it because you’d have to go a long way to find a better gritty urban fantasy with a dark sense of humour limning its edges.

Pete answered a few questions for me here and you can get the novella here.

1. So how did the Flotsam series come about?

The original Flotsam series was a year-long serial I wrote for the Edge of Propinquity webzine back in 2011. Itâs one of those projects that never quite worked out the way I wanted it to – I went in with too much ambition, and never really found the time to pull off the series of stories I wanted to tell due to a combination of new jobs and family illnesses that disrupted the twelve months I spent writing the serial. When it was finished, I filed all my notes and drafts on the computer and thought, well, one day Iâll go back and do that properly.

Then I got a message from Jennifer Brozek in early 2013 when she was starting Apocalypse Ink Productions, asking if Iâd be interested in revisiting Flotsam as a novella trilogy. I was in the process of looking for new projects at the time, so it seemed like a natural fit, so we hammered out the details of what the novella project would look like.

Turns out the novellas are a very different beast to the original serial. Itâs basically a whole new story thatâs been spun out of the same DNA. There are a few things that look familiar if youâve read the Edge of Propinquity stories, but things quickly started heading off in a whole different direction.

2. Whatâs the inspiration behind Exile?

I really wanted to write a book about the Gold Coast. I grew up there and have a very personal connection to the setting, but every time I go back Iâm struck by the fact that itâs one of those cities thatâs ideally suited to being an urban fantasy setting. It occupies a space in the Australian psyche rather like Las Vegas does in the US: what happens on the Gold Coast stays on the Gold Coast.

Everything about the city seems to feed into into that, particularly when youâre a local. Itâs got a highly transient population of tourists and people who kind of drift in, stay a few years, then disappear. The whole city is highly decentralised – while most cities build up around a central point, the Gold Coast is kind of spread along the coastline and doesnât really feature a âcentreâ you can point to. Itâs just a series of small holidays towns that bled together over time.

And, most importantly, it doesnât really have locals. People live there, sure, but generally theyâre people who have moved to the Coast from somewhere else, chasing a particular lifestyle. My family arrived there when I was twelve and I stayed until I was twenty-three, an in that entire time I met maybe three people who were actually born on the Gold Coast (all of them live elsewhere now). I always figured that if I were a vampire or a werewolf or a fallen godling that wanted to keep secret, the Coast would be the perfect place to lay low.

Everything else stemmed from that. Keith Murphy heads to the Coast to lay low, and his life is infinitely complicated because of the creatures that are living there

3. You are the King of Structure ? does this make writing and plotting easier for you?

Hmm. So Samuel Delany has this great argument in his book, About Writing, that essentially says that the goal of a writer is to learn a series of complex models – sentence structure, scene structure, narrative arcs – and internalize them until theyâre felt on an physical and instinctual level.

Itâs probably the best explanation Iâve ever seen for my obsession with narrative structure, âcause Iâm not a writer who plans in advance. Iâm a total pantser when Iâm in creative mode – Iâll sit down at the keyboard and start typing a scene, waiting for the line of dialogue or sudden action that catches my attention and gives me a hook I can hang a story on.

Everything after that comes from trusting in the structure on an instinctual level: Iâll look at a scene and realise Iâve been hitting a particular narrative beat, then figure out how to get from there to the next beat that needs to be touched upon. I trust in the process, and my gut telling me that Iâm moving things too fast or too slow.

Which is really a long way of saying Iâm not sure how to answer the question, âcause Iâve been writing like this for long enough that itâs just what I do. The only time I really break out the guidelines for narrative structure as a conscious thing is during the editorial phase, when I canât figure out why a story doesnât feel right, and the answer is almost always the result of a missed narrative beat or an ill-timed transition from one act to the next.

And when you really start looking at the minutia of structure, it can give you a deeper appreciation of just how smart certain writers are. I always thought Die Hard was a pretty good film, but when I finally got around to doing the beat-by-beat breakdown of the main plot and the subplots for my blog, it gave me a whole new appreciation for the film. It does a whole bunch of really important, really minor things extremely well, almost of all of which disappear once they started producing sequels.

4. Who are your literary influences?

Iâm a huge fan of hardboiled detective and crime writers, from classic writers like Raymond Chandler and Dashiell Hammett through to some of the phenomenal modern practitioners like Christa Faust, Charlie Huston, and Dennis Lehane.

That said, the Flotsam series owes a lot to Lee Childâs Jack Reacher books and Max Allen Collinâs Quarry series. Theyâre very different writers in terms of their narrative voice and the style of story, but both characters have this level of unflappability about them. Both characters are ruthlessly pragmatic, omni-competent literary creations and thereâs a little of that in Keith Murphy. I really wanted that sense of a guy who isnât phased by much, least of all the demons and sorcerers and looming threat of the apocalypse that makes up his day-to-day life.

5. Whatâs next in the Flotsam series?

Book two, Frost, will be out in ebook come December. While the first book revolves around what itâs like for Keith Murphy to come home for the first time in sixteen years, reconnecting with old friends and enemies, the second book is all about the mistakes he made to send him home and the consequences that will have for him, his allies, and the city as a whole.

The third ebook will be out in 2015, wrapping up Keithâs story, and there will be an omnibus edition of all three books in print at some point in the future.