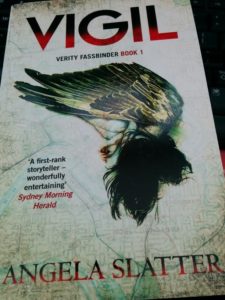 The lovely Dr Anita Harris is presenting a paper next week, and Vigil is one of the subjects! Always thought I’d be dead and dusty before something like this happened – if at all!

“Seas, Rivers, Cities: Fantastic Psychogeographies of Malacca and Brisbane in the novels of Yangsze Choo and Angela Slatter.”

“This paper proposes to examine the ways in which Gothic fantasy and Urban fantasy novels repurpose and reconfigure the architecture and geographies of cities through a psychogeographical perspective. Two cities in the Asia Pacific Region will be explored in this comparative analysis: Malacca and Brisbane through the works of Yangsze Choo (The Ghost Bride) and Angela Slatter (Vigil, Corpselight). In the work of both authors, the familiar is made strange and uncanny through alternate fantastic versions of both cities. Both Malacca and Brisbane are near-coastal cities, albeit inland enough that their identities are defined by rivers rather that the sea. However, both cities are steeped with hybrid cultures from different countries that overlap and inform each other. In Yangsze Chooâs Mythopoeic Award-nominated novel The Ghost Bride, the streets of Malacca have an analogue in the underworld, and the protagonistâs odyssey through it brings her through landmarks such as the Stadhuys. Similarly, in Slatterâs Vigil, the narrative roots through familiar Brisvegas landmarks and streets such as West End and Boundary Street, revealing a hidden supernatural hierarchy interspersing the day-to-day and the mundane. Rated as urban fantasy, Slatterâs Vigil has a supernatural protagonist embroiled in a war on the streets of Brisbane. In both Chooâs and Slatterâs novels hidden hierarchies and geographies are superimposed upon the day-to-day and the mundane. Through a Gothic and psychogeographical theoretical framework, this paper will unearth the ways in which the geography of both cities leave an impact upon the surreal and speculative visions of both authors, and what these visions reveal about human hopes, wants and desires as framed by buildings, streets, and the less tangible liminal structures between life and death.”

This entry was posted in News and tagged Cities: Fantastic Psychogeographies of Malacca and Brisbane in the novels of Yangsze Choo and Angela Slatter, conference paper, Dr Anita Harris, Rivers, Seas, The 17th Biennial Symposium on Literature and Culture in the Asia-Pacific Region, Verity Fassbinder series, Vigil. Bookmark the permalink.