Sunday morning purchase: The Machine Who Was Also A Boy 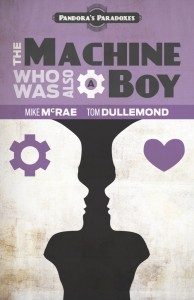 I just bought a book I’ve been meaning to get a hold of since this year’s Conflux.

It’s this one, The Machine Who Was Also A Boy, by Tom Dullemond and Mike McCrae, and produced by punchy indie eMergent Publishing (most ably helmed by Jodi Cleghorn).

I imagine I’ll be passing it on to my nephew when I’ve finished … or maybe buying him a copy of his own and keeping mine all to myself. The smart money is on the latter.

Pandora Robinson was confused. What made a belief true or false? What gave words their meaning? And was a lie still a lie if you truly believed it? Sometimes the world just didnât make a lot of sense.

Answering questions at school was hard enough, but after meeting a most peculiar mechanical man and his silent young companion, Pandora faces the hardest question ever. Are we the same person today as we were yesterday?

From the lair of the Sphinx to the bowels of The Theseus, clues to the answer abound, but will Pandora be able to put them together in time to save an unlikely friend and still make it to court in time to stop them taking her away from her Dad.

The Machine Who Was Also A Boy is a middle school tale of puzzles, paradoxes and perplexing predicaments.

This entry was posted in News and tagged by Tom Dullemond and Mike McCrae, emergent publishing, Jodi Cleghron, The Machine Who Was Also A Boy. Bookmark the permalink.