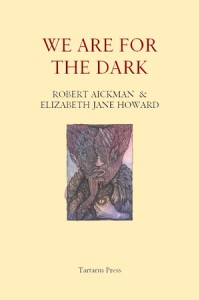 Great article from Rick Kleffel over at the NPR Books site about “The New Strange” and Robert Aickman, specifically with regards to We Are for the Dark, the latest Aickman and Howard collection from Tartarus Press.

If you want a chilly comedown from summer’s heat, you can’t do much better than the work of Robert Aickman (1914-1981), a master of “strange stories” whose books, long out of print, are now being republished by the small U.K. press .

It’s tempting to pigeonhole Aickman as a ghost story writer â he did, after all, edit the first eight volumes of the annual Fontana Book of Great Ghost Stories. But haunting comes in many forms, and not all of them are supernatural. After all, how many of us have ever actually seen a ghost? At best, any one of us might be able to call up a friend of a friend who has seen a shade in the shadows. It’s a good bet, though, that every one of us at one time or another has been haunted by our own choices.

Aickman understood the many ways of haunting, and in his own work, he avoided invasions from the afterlife in favor of something both more grounded and more intuitive. From his first publication, 1951’s We Are for the Dark, written with novelist Elizabeth Jane Howard, to his final published posthumous collection in 1985, Night Voices: Strange Stories, Aickman told us stories that gave our inner fears and unspoken desires a strange literary form. The new edition of Night Voices, just out from Tartarus, includes all the stories from the original volume, plus The Model â a short novel set in Russia â and the introductions he wrote for the Fontana anthologies.

Also mentioned are Reggie Oliver, Jason A. Wyckoff, and myself.