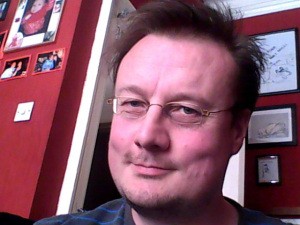 Gary Fry lives in Dracula’s Whitby, literally around the corner from where Bram Stoker was staying when he was thinking about that character. Gary has a PhD in psychology, but his first love is literature. He is the author of many short story collections, novellas and novels. He was the first author in PS Publishing’s Showcase series, and none other than Ramsey Campbell has described him as “a master.” Gary warmly welcomes all to his web presence: www.gary-fry.com

What inspired your story “Scraping By”?

I find the economy and how global problems are translating into local difficulties really fascinating. It maps on to interests I had as a student, trying to figure how the individual related to society (and vice versa). The credit crunch was a bit like a fiscal earthquake, like a slippage in the structure of the social world. The tsunami of austerity which arose caught so many folk sitting out on beaches, some nonchalantly in hammocks, others sipping self-satisfied drinks, etc. And so in this story I wanted to capture that feeling of a couple’s lives in motion, and how they were suddenly swept sideways by events outside their control, and how little they could do to deal with that. Scraping By is, I hope, about the way private and public tragedy intersect.

I’d say it was Roald Dahl’s ‘Man From the South’. It’s a perfect one-note horror story, whose terrors are located firmly offstage. I like that sense of elusive (and allusive) terror. It appealed to me powerfully as a kid, and just as much as an adult. One unusual aspect of it is, I think, the way that, unlike many horror tales which leave the reader just before some terrible event occurs (indeed, the story’s structure promises that all along), the terrible events in that tale have already occurred. If you know the piece, you’ll know what I mean. The whole tale is like a great melody: simple and resonant. Believe me, that’s hard to achieve.

Ramsey Campbell. Stephen King. H P Lovecraft. I think those have had the most influence on me, and in that order. However, there are significant honourable mentions to Robert Aickman, M R James, Algernon Blackwood, TED Klein and Michael McDowell. I’d also include the scariest writer not described as a horror writer: Ruth Rendell (and her twisted sister Barbara Vine).

Almost entirely horror. I do occasionally touch upon scifi concepts, but usually within the Lovecraftian framework of alien beings summoned to earth. I don’t read much scifi or fantasy — Lord, I’ve tried, but it’s not for me, alas — and so tend to stick to what I know. My fictional preferences are very much grounded in the minutiae of everyday life, like a kitchen-sink drama with ghouls. I don’t why all that appeals to me; my north of England upbringing probably bears the guilt.

Oh, plenty. With a little time free right now, I’m indulging in all the books I never quite got round to as a younger man. I’ve devoured with peerless pleasure the likes of Roth’s American trilogy, Ellison’s Invisible Man, the less famous Greene novels, rereads of my beloved Martin Amis, and also Atwood, Updike, Faulks (a new discovery and a welcome one!), Murakami, et al. Going forwards, I hope to try a number of other writers who’ve always been on my radar: A S Byatt is there, as are Johns Cheever and Irving, along with Hilary Mantel and many more. Every so often I intersperse such weighty stuff with a bit of comic relief like Tom Sharpe. The number of books I’d like to read staggers and dismays me, but then I look at it another way: I have all these great books to read!