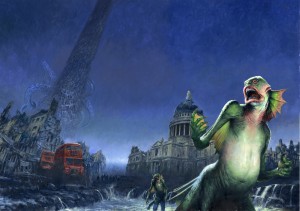 I’m very excited to reveal that Weirder Shadows Over Innsmouth, the third volume in the Stephen Jones edited Innsmouth series, has its Table of Contents all ready.

Once again taking Lovecraftâs original 1931 novella as inspiration, we are introduced to the Massachusetts seaport and its ichthyoid denizens years before that fateful FBI raid. From there, Dagonâs blasphemous spawn spread out across the globe, while the offspring of that decaying fishing town undergo their own, often bizarre, metamorphoses.

As the world changes, so through eldritch rituals and human sacrifices the Deep Onesâ mastersâthe terrifying Great Old Ones themselvesâprepare to escape their prisons when the stars are right, so that they may once again reclaim the Earth as their own.

As the waters continue to rise, mankind begins its ultimate struggle for survival against a pantheon of dark gods and their batrachian foot-soldiers . . . 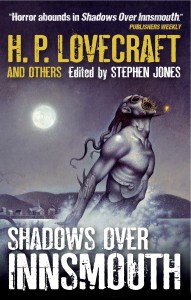 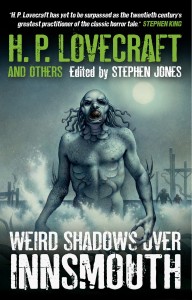 Still want more? How about the fact that Titan Books will be releasing trade paperbacks of the first two books in time for World Fantasy in Brighton this year – when the hardcover of Weirder Shadows will be released into the wild.

Two of my stories are in it – a reprint of “Rising, Not Dreaming” (originally written for Silvia Moreno-Garcia’s Innsmouth Free Press) and a brand spanking new tale, “The Song of Sighs”.