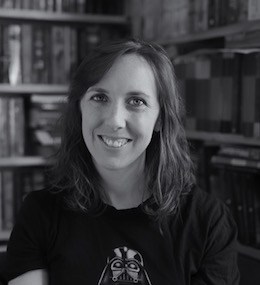 A black belt in jujitsu, Sam Hawke lives with her husband and children in Australia. City of Lies is her first novel. She also has the shortest bio to ever appear on this blog.

1. What do new readers need to know about Sam Hawke?

Hmm, depends for what purpose. If itâs so they can send me gifts, they need to know that dark chocolate > milk, Ten is the best Doctor, and you canât go wrong with a book voucher

Oh, you mean as a writer? Fine. *crumples up gift list*

You might like to give my fiction a look in if you like secondary world epic fantasy with non-medieval-European settings and elements of mystery/suspense. Or if you prefer instructional blog posts on how to defeat a cheese hangover or wasting time productively* you might enjoy my considerably sillier online presence.

2. What was the inspiration for City of Lies? 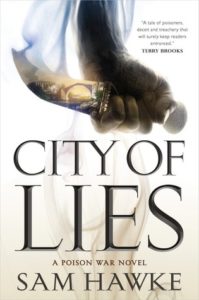 Fantasy is full of assassins and warriors and magicians and heroes, and donât get me wrong, I love these staples of our genre as much as anyone. But Iâve always been very interested in the characters working behind the scenes â the advisers and sidekicks and friends â and I also enjoy reading characters who play outside the usual gamut of professions and skill sets. Perhaps because Iâm obsessed with food, the idea that eventually became City of Lies began with the profession of poison tasting.

Poison tasting was a job in ancient civilisations like Egypt and Rome but typically was the role of a servant, and to succeed at your job was to die, preferably quickly, before the intended victim ingested poisoned food. Thereâs not much of a story in that (flash fiction, maybe?), but I wondered (again: obsessed with food) in what circumstances it might instead have been a skilled profession. Could you learn to detect the tastes, smells and textures of toxins in food? Could it be a valued and honourable role to protect an important person? A hereditary duty, with one family protecting another? What kind of civilisation would develop the need for such a role? Perhaps one where open violence isnât tolerated, but a subtle poisoning is part of political reality?

Suddenly I had characters introducing themselves to me â a poison taster unexpectedly thrust into the role when a new poison kills the previous taster; his older sister, whose chronic poor health prevented her from taking up the role that should have been hers; and the new Chancellor theyâre now charged to protect, and who is also their oldest childhood friendâ¦ Then I set about making life extremely difficult for all of them, and City of Lies was born.

3. What were you favourite books as a child?

I donât know how anyone answers that without taking up pages! Iâm almost certainly forgetting important formative books but here are a sample of the ones I can remember being the most obsessed with/re-reading the most in my primary school years: 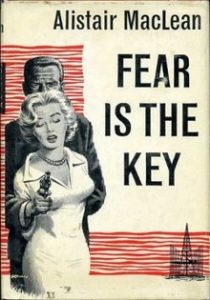 I know itâs quite a long list but Iâll have you know this question resulted in many hours of frantic texting with my siblings and difficult google searches to identify some of those titles (you try finding a book on google which was likely, possibly, called âJulieâ and had a purple cover, or âthat one about the chess game, with the kids and the evil guys, and maybe time travel?â). Anyway youâll see from that list that I was a suuuuuper weird kid with bizarre taste, but apparently my pre-teen brain liked adult spy thrillers exactly as much as stories about karate and ice skating and escaped elephants and plucky children saving the day from computer games that came to life. I suppose if I had to draw a connection between these books, though itâs an eclectic bunch, I always loved stories of magic and/or suspense, family, mystery and optimism.

Edited to add: Thanks to my amaaaazing mother doing late night bookshelf scouring, I can confirm that it IS called Julie and it was by Cora Taylor. Ha!

Â 4. Which writers have been your biggest influences?

There are probably two fantasy authors who have most inspired and influenced me. First, Robin Hobb, who writes the way I can only dream of writing â she tells stories that break my heart (in the best way) with characters whose lives feel complete, and in a style so effortless and elegant it just reads as perfection to me. She taught me that first person could be a thing of utter beauty and that the old beloved tropes of fantasy could be told in fresh and gorgeous ways. Second, Kate Elliott, whose catalogue is probably the most drop dead impressive array of fantasy I can think of from a single author â she has written dozens of books all over the SFF genre spectrum, and just knocks them all out of the park, each more thoughtfully and carefully crafted than the last, with the flat out consistent best worldbuilding I can think of. If I could produce work a tenth of the quality of Robin or Kate, Iâd consider it career success.

In my teens and 20s in particular I always also took a lot of inspiration from the giants of the Australian fantasy scene â Sara Douglass, Trudi Canavan, Jennifer Fallon, Kate Forsyth, Isobelle Carmody, Garth Nix & Glenda Larke, to name a few â so many of them were these amazing women writing the sorts of books I wanted to write, and they lived right here in little ole Aus. ð They gave me hope that it was a career that could actually work.

I also learned a lot about action, pacing, and suspense from those old spy thrillers that I so loved (my grandmother had a shelf of Alistair MacLean novels that I couldnât get enough of, even when I was ridiculously under their target age group). I suspect some of this deep affection found its way into the plotting of City of Lies, which is effectively a closed-room mystery as well as a fantasy. 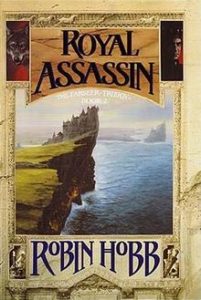 Keeps the underperformers in line *shakes fist* My sibling protagonists are decent humans but theyâve been raised in a very particular manner and theyâre extremely inward-looking and focussed and ultimately oblivious to the realities of the society in which they function. My favourite character, Hadrea, is someone who comes in part way and starts calling them on their BS. She hasnât been exposed to the complicated politics that dominate their lives, and she gets to say and do things that the three of them just wouldnât. She is a blast to write.

6. When did you decide you wanted to be a writer?

Certainly by the time I was in year 1 I had worked out that it was possible to write books, not just read them, and I had embraced the concept by making dozens of ânovelsâ which consisted of a big wad of paper stapled together, an illustrated cover, elaborate chapter names (âWhat happened to the suitcaseâ, âJanet gets a rude shockâ, âIt all ends with teaâ; yes, I was VERY into Enid Blyton at the time). I hadnât quite figured out the follow-through bit, though, so each chapter only had a sentence or two.

The desire to be a writer never went away, but I definitely went through some long anxious periods of assuming I would never manage to write anything good enough to sell. I farfed around for most of my 20s, editing other people but doing little writing for me. Then after I had my first child I decided Iâd better give it a proper crack or else stop pretending I ever would.

8. What was the highlight for you of WorldCon75 in Helsinki?

I see what youâre doing there, with your use of the singular, preventing me from rambling on and on listing exciting things like the glass walled toilet with the view over the city, swapping Tim Tams for Irn Bru with a bunch of gorgeous Scots, going flying squirrel hunting, touring Soummellina, meeting so many amazing authors and publishing folk (and only embarrassing the shit out of myself one time), getting lost on the way to a panel then panic-hiding in a toilet, missing the masquerade but ending up having tea with my favourite author in all the world while storm-stranded in our hotel LOOK IT WAS REALLY FUN IS ALL IâM SAYING OK?

I love TV, and probably watch far too much of it. I like a whole range of stuff, but currently preferring comedies and optimism, just becauseâ¦ *gestures vaguely to 2017*

So I have recently loved The Good Place, Brooklyn 99, Crazy Ex Girlfriend & Dirk Gently, and rewatching The West Wing. More generally though I have a weakness for quirky small town shows, ensemble casts, and a little bit of the supernatural.

9. You can take three books to a desert island ? what do you choose?Â Â 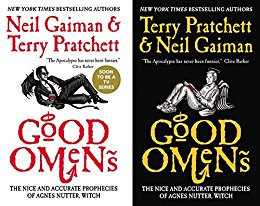 Please direct this question at a person who DIDNâT spend the last 4 hours trying to remember every beloved childhood book, because seriously, Angela, I canât pick OK? Iâm a fantasy reader, I like long series!

OK youâre going to get a thoughtless quick answer because if you give me too much time to think Iâm obviously going to have time to think of a way to not get stranded on the island, so:

–Â Â Â Â Â Â  Fear is the Key (Alistair MacLean) (mostly because now youâve made me think about that I really want to read it again).

If I ever stop googling vague descriptions of books I loved as a child, I suppose Iâll go back to writing the sequel to City of Lies.

Now, what about that one with the kidnapped kids, and the guard they nicknamed Spider, andâ¦