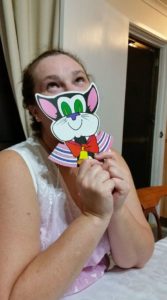 Why yes, I do look like crap, but I haz a crown.

Well, 2016 was for me (as well as a lot of other people) quite challenging. Professionally, it went really, really well – Vigil launched in July and is still going strong, I published two short story collections, four new short stories, and had three stories reprinted. I handed in Corpselight and am now plotting Restoration to finish off the Verity Fassbinder series. I wrote a further eight short stories for publication in 2017 and 2018. I had a lovely book tour of the UK (and yes, I know I still need to finish off that blog series), and was the Established Writer-in-Residence at the Katharine Susannah Prichard Writers Centre in Perth.

Personally, however, it was poop. The less said about it, the better, but highlights include several family deaths and illnesses, the breakup of my eight year relationship, having to move house, and the stuffing up of both my old lady knees. It got to the point where I started to look at the sky, slightly fearful that a safe or a grand piano was going to fall on my head.

But I got through it. I got through it and there was one thing I was holding out for as a proper full stop on the Year of Brown Stuff. What I really looked forward to at the end of 2016 was the annual Trivial Pursuit contest with my mother and sister.

Every Christmas, my sister and nephew and I head to our parentsâ place in order to do the Christmas thing.

In Australia, the Christmas thing for a chunk of the population generally seems to involve pretending weâre somehow in the UK or Europe, and my lot were no exception for many years. Despite the heat, the legions of flies and mosquitoes big enough to saddle, despite six generations of living in the Sunburnt Country, we still somehow thought that the Irish, Scottish, Welsh, English, German, French, Danish and Portuguese blood weâve accidentally ended up with meant we were obliged to cook and eat a hot feast. To turn the ovens on and up, up, up whilst outside the sun tried to jokingly bake us in forty degree Celsius temperatures.

Fortunately, in recent years cooler heads and meals have prevailed. Thereâs invariably a moment for most Australians with Western backgrounds when they realise the heat emanating from the roasting turkey, chicken, duck, potatoes and pig, is enough to give a small outback town radiation burns. If you by some horrible, horrible mistake end up outside during the day – say, after 8.30am or before 6pm – youâre a goner. If youâve got hot food inside you youâre basically spontaneous human combustion waiting to happen.Â  Do not get me started on Christmas pudding.

Of course, in many homes some idiot filled with bonhomie and beer will suggest a friendly game of Christmas cricket – cricket, a game meant to be played in a balmy British summer, not under a sun that is trying to kill you and everyone you love. This person should always be knocked unconscious and left under the Christmas tree for his husband or wife to find – tying a red bow around some body part is optional, but freaking hilarious.

Fortunately, no one suggests cricket chez nous nowadays. Those with an interest in such pastimes know the best way to participate is by sitting in a recliner-rocker in air-conditioned comfort with drinks and leftover pavlova easily accessible. Thatâs my dad taken care of. The nephew has all manner of electronic devices to keep him happy and no interest in cricket, bless him.

My mother, sister and I have another holiday pursuit entirely.

Itâs highly competitive. It has been known to be played until two in the morning, when considerable sledging occurs – something weâd never normally consider passable behaviour, but when it comes to Triv (yes, said exactly like The Young Onesâ Rick-with-a-silent-p) all bets are off. Three otherwise delight, intelligent women turn into Trivial Pursuit Hooligans. It is possible we might have invented full contact Trivial Pursuit. Anythingâs possible. Getting one of the piece of pie questions right results in shouts of âPie me!â ringing out at ungodly hours of the night and/or early morn.

Keep in mind this particular edition of Triv was purchased in the Eighties. Itâs almost an antique. Weâve answered these questions so many times, itâs amazing we get any wrong ? thatâs where the aging process and only playing once a year work in our favour. It all seems new and exciting every year (the goldfish effect, I guess). I remember enough to be able to float the answer âAlbert Schweitzerâ mostly at the right time, but my Achilles Heel, as Mum and Sis well know, is the area of sport. On more than one occasion my victory lap around the kitchen wearing the crown of superiority has been delayed for a couple of hours by the careful and cunning deployment of a question about Olympic fencing or soccer players or how many points a particular part of the dartboard gets you. Apparently neither âI donât care! Nobody cares!â norÂ  âAlbert Schweitzerâ is the correct answer.

Did I mention thereâs a crown for the winner?

Thereâs totally a crown for the winner.

Actually itâs a party hat shaped like a cat, but itâs a crown if we say it is.

I have worn it more times than anyone else.

Am I a gracious winner?

Am I a gracious loser?

I was robbed! Who are you calling a loser? You motherâ

Trivia is in my wheelhouse, people. I look forward to it every Christmas, I think Mum and Sis do too even if I do occasionally catch strains of peasantâish rebellious rumblings. But this is the one time all year that my years of collecting useless, wedgie-attracting, nerdalicious knowledge finally pays off at the annual Slatter Ladiesâ Triv Tourney.

And I am once again reigning champion. But my family love me anyway. Or they say they do, at least. *looks up to check for falling safes and/or grand pianos*

This entry was posted in News and tagged angela slatter, christmas, trivial pursuit. Bookmark the permalink.

4 Responses to A Belated Christmas Blog