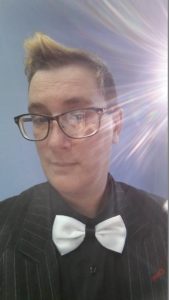 1. What inspired your story, “Splintr”?

I have notebooks and documents full of idea scraps â a line, phrase, character sketch, idea, images. One of these scraps was the first line, âIt was the last sunset on Earth. Againâ, which Iâd been trying to make into a story for a couple of years but just wouldnât gel. When the call for this anthology came up, I immediately knew it would be the perfect opener for an end of the world scenario set in New Zealand. I also played with the concept of the physical edges of New Zealand â shoreline, mountain tops â and the imagery of an eye closing on the world kept coming back to me. The movie version of âThe Quiet Earthâ also had an influence on the empty spaces and the concept of holding a psyche together (or not) and travel within those empty spaces.

Since I joined the New Zealand speculative fiction writing community over 6 years ago, there have been some brilliant anthology projects showcasing our national talent. To be a part of these projects and being able to share our unique style of speculative fiction with the rest of the world is quite an honour. The creators, editors, and publishers of anthologies like âA Foreign Countryâ, âTales for Canterburyâ, âRegeneration IIâ,Â  âBaby Teethâ, and now âAt The Edgeâ are all dedicated to lifting up each otherâs voices onto the world stage.

The ideas and possibilities of language. Doing strange and wonderful things with words tickles me purple. The short form gives me the opportunity to explore a single idea, try to contain it within a few thousand words, and yet let that idea live for the reader beyond the foundation of those words. I want my short stories to be conversations with the great short stories that came before mine, the politics of today and tomorrow, and reach out to the stories of the future.

I cite Anne McCaffreyâs Pern as the books that made me fall in love with science fiction and fantasy, but it was Melanie Rawnâs Sunrunner books that made me think âWow, I wish I could have written THAT!â The imagery of the colours, gemstones, and dragons, the politics, the magic, and the myriad of complex women Rawn created is a physical taste in my mouth to this day. Itâs no coincidence that I have a tattoo of a dragon from one of those book covers.

My long term goal is to publish a collection of my short stories. In the short to medium term, I aim to be published in all the major SFF short fiction venues â Iâve always got a couple of stories on the go in between drafting and editing mode. In the next 12 months, Iâm planning a trip to Worldcon in Helsinki.