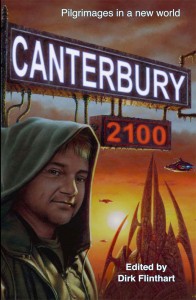 So, back in 2008 the inimitable Dirk Flinthart edited a tome called Canterbury 2100, which essentially walked in the footsteps of Chaucer’s Canterbury Tales, only with more science fictiony bits and better, more comfortable shoes.

The blurb? So pleased you asked:

Six hundred years ago, a group of pilgrims made their way to Canterbury, and Geoffrey Chaucer created one of the great works of English literature. A hundred years from now, a nuclear-powered steam train is stopped by a massive storm on its journey to Canterbury, the new capital of an England struggling to rise from the ashes of the twenty-first century. As the waters rise with the storm’s fury, the weird and wonderful passengers tell the stories of a new age …

And now the book is having a new life.

FableCroft have re-released it as an ebook – you can get the Kindle version here for $4.99.

With stories from the likes of Kaaron Warren, Thoraiya Dyer, Lisa Hannett, Martin Livings, Stephen Dedman, Laura Goodin, Trent Jamieson and many more (including me), how could you go wrong?

âThey built a city and they raised it high,â she began, repeating the words as a formula, as if she had told this story many times. âThen, one day, one of its women woke up.â