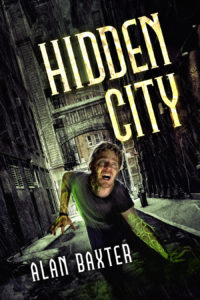 Today, author Alan Baxter is taking over the blog!

Huge thanks to Angela for hosting me today.

With the recent release of my novel, Hidden City, Iâve done a lot of thinking about genre. Iâm unashamedly a genre writer, and the simple fact is that Iâve never met a genre I didnât like. I love to read westerns, crime, noir, mystery, fantasy and SF, horror of course, and more. And while most of my stuff is dark fiction and almost always includes elements of dark fantasy and the supernatural, Iâve always ignored genre boundaries while writing and crammed in as many ideas as I felt I needed. With Hidden City, I did something a little differently. I deliberately started with noir. I knew I wanted to write a noir novel, but then build dark urban fantasy and horror into that.

I live in the country now, and thatâs where I was born and raised (in a different countryâs country) but in between Iâve lived in a lot of cities. They fascinate me, thrill me, and appal me in equal measure. Cities are incredible places, so a lot of my fiction is set in them. And itâs that city-based sense of place that most attracts me to noir fiction. Within those classic noir stories of the past, and in the modern stories that emulate that style, the city is ever-present. Itâs a character too, as important to the plot as the protagonist and antagonist. Itâs a bit player or a secondary character, but an essential one. So when I came to write Hidden City I decided to up-end that trope a little bit. In my novel, the city is a key player, a co-protagonist. And Cleveport is not only an essential character, sheâs a sentient one.

Iâve long held the belief that all cities have a kind of sentience. Consider, if youâve been, places like Sydney, London, Amsterdam, Hong Kong, New York, any other you care to name. They all have distinct personalities, and those cities shape the population just as much as the population shapes them. Itâs a small step to consider those personalities as actual gestalt sentience. Thatâs where I went with Cleveport. And a city that had grown to that level of conscious awareness would also attract a higher level of human consciousness, donât you think? So whether they realize why or not, people with active or even latent magical tendencies are drawn to Cleveport. Their presence subsequently increases the citymind and Cleveport grows further.

So thatâs my noir setting and my fantasy element. But Iâm a horror writer too. So how do I fit that in? Well, it seemed obvious once I thought about it. If I have this sentient city and her connected population, it would be pretty terrible if Cleveport was sick, even dying. That would mean her population would be dying too. And perhaps none of them would realize.

Well, one person realizes. Steven Hines, low-level citymage and grief-stricken private eye, sees the changes in his city, as heâs more closely connected to her than most. And he knows itâs only going to get worse. He also knows that the authorities canât recognize the real problems and are only treating the symptoms. Meanwhile, organized crime syndicates are making hay while the sun shines. But itâs a false sun, thatâll burn everyone to cinders in a short amount of time. So Steven Hines and a handful of friends have to step up and save everyone, even if it costs them everything.

So my idea to write a noir novel, to indulge that passion of mine, went pretty dark. But thatâs what my fiction always seems to do. I like it in the dark. Do you?

Hidden City is available in ebook and paperback wherever you buy books. Learn more at Alan’s website: https://www.alanbaxteronline.com/books/hidden-city/ or Buy it on Amazon: https://www.amazon.com/dp/B078YH5G4F/