Happy New Year from the Lair of the Evil Drs Brain + Tanith Lee! 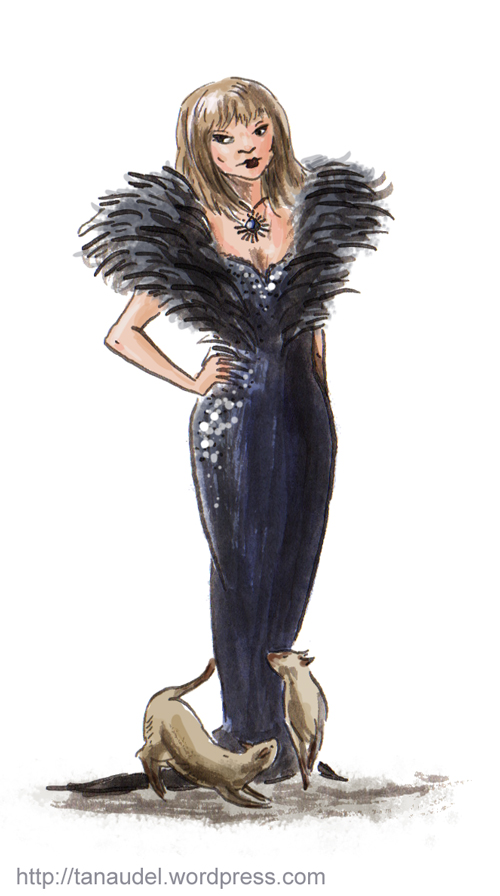 Happy 2013 from the Lair of the Evil Drs Brain.

Our plan for this year is for the Lair to be a periodic feature rather than a regular one because, as we discovered last year, life tends to interfere with all one’s good intentions. Also: books and the writing of them takes up a lot of time – who knew?

Anyhoo, to kick off the Lair for 2013 we have invited the wonderful (in manner of international treasure) Tanith Lee into the Lair. We’re on our very best behaviour, we’ve pressed our frocks, done our hair and make-up, polished our Ferragamo Mary-James so they shine like diamonds, and brought out the special tea pot and cups with the gold trim. Dr Lisa has (obviously) given me a cupcake with several valium stuffed inside to minimise my unprecedented fangirl behaviour. The art is, as always, by the wonderful Kathleen Jennings – and if you’re a Blake’s 7 fan, you’ll notice that the outfit is one of Servalan’s best.

What to say about Tanith Lee? She was the first woman to win a British Fantasy Award; she’s the author of (among many others) the Piratica Series, the Flat Earth Series, the Birthgrave Trilogy, the Unicorn Series, the Blood Opera Sequence, the quite amazingÂ The Blood of Roses; she wrote episodes of Blake’s 7; she has won World Fantasy Awards as well as British Fantasy Awards, and been nominated for multiple Nebulas;Â  (pauses for breath) and, I am reliably informed, she is the reason Theodora Goss writes.

Dr Angela: The Flat Earth Cycle is a tremendously accomplished piece of work â what were your influences in writing it and where did you get the idea of the mosaic structure?

Thank you very much. As told in the intro to the book (Norilana edition) a single phrase, a clue in a word-game my mother and I were playing, began the Flat Earth â âGo nowhere

on a horse that fades.â My mother coined the clue â therefore in a way, the whole sequence. Meanwhile the idea of a world that was flat had already haunted me for about 4 years. Azhran simply arrived, magnificent, deadly and irresistible.

As for any structure â it too just arrived. Thatâs what most of my work does. It tells me what voice it will use, how it will arrange itself, and â as we go along â what it will have and do.

Dr Lisa: I once read that Ray Bradbury usually had about 10 stories on the go at once: heâd have one upstairs, one in the living room, a few in the study, and drift from room to room to work on them, depending on his mood. Youâre such a prolific author, I wonder what your methods are â unconventional like Bradburyâs? Do you jump from story to novel to story? Or do you work on a single piece until itâs finished?

I work straight through, til that particular book/story is complete. However, if asked for a short story in the middle of the novel, or if one comes due, I will stop the novel at a reasonable place, write the story, then resume the main work. Aside from this, there have been three novels that interrupted by other novels. These are Day by Night (SF Fantasy) which was interrupted by Sabella (SF_Vampire), Sung in Shadow (a retell of Romeo and

Juliet in a parallel Renaissance Italy) and Deliriumâs Mistress (Flat Earth) which was interrupted by The Gods are Thirsty (Historical: The French Revolution). When I say interrupted, by the way, picture something in each case trumpeting, stamping and banging on the brainâs door with hammers.

Dr Angela: You use a lot of folklore, fairytale and myth as the basis for your tales â what inspires you about these sources? You also range across fantasy and horror and science fiction with apparent ease â do you have a preference for one of these genres?

While my father taught me how to read â the schools failed, (I was/am dyslectic, which then went unrecognised) â and turned me on to Shakespeare, Ibsen, Chekov â and other wonderful writers, my mother snared me for the Greek gods and their myths, altered fairytales â the Prince marries the Witch ( See Prince Amilec in Princess Hynchatti) â crazy humour, and science fiction/fantasy. I remain hooked to all these (literally) fabulous areas â less genres than exploring adventures. Horror, of course, resides too in great writing (such as that of Shakespeare, Dickens etc.) not to mention Mythos and the Brothers Grimm. Once I could read, I spread my wings and flew where I wanted. Nobody that counted ever said âOh, donât bother reading thatâ. If they had, so well-lessoned had I been, Iâd have regarded them with contempt. As I read, so I write. I âcross-genresâ â always have instinctively and as the story requires. I have no preferences except â my best loved Lee book is always the One I Am Writing Now.

Dr Lisa: When speaking of your characters in interviews, you refer to them so vividly, so intimately. After spending so much time with them during the writing process, do you miss âhearingâ them once the book or story is complete? Or are there thousands of people chatting away in your mind all the time?

Luckily not the last! I do though often miss familiar characters, and the whole book, even short story, when finished. Soon enough however Iâm working on something new generally, so then become submerged in that. Very occasionally one or two characters have remained to nag, requiring some (generally small) extra inset or insight. But that can be helpful.

Dr Angela: Your story in Don’t Bet on the Prince, “Wolfland”, is a wonderful twist on the werewolf story, and the character of the grandmother is quite confronting (she’s not the sort of cookies, cuddles and warm milk granny we like to expect) â what inspired that particular story? 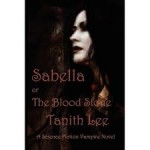 No idea, really. Mostly I think I just started Little RRH in the collection. And if I analyse, Iâd add, probably, that one way to retell a tale is to reverse the character goals, and/or personalities. So we see the gentle heroine become more obstreperous and wilder, the Wolf persona quite natural â if âherbally inducedâ, and victim-Gran an independent, authorative and virtually indestructible matriarch.

Dr Lisa: People regularly comment on your workâs incredible imagery, its lush and often sensual language; it is at once visual and also musical. One would think youâve been a painter, a classical pianist and also a writer! To what extent do music and visual arts inspire you?

Once more â thank you. But yes, music painting â and other imagery â do inspire me. My father and mother, (again) got me hooked on such geniuses as Shostakovich, Rackmaninov, Prokofiev, Debussy â to name only four, as well as wonderful painters â Leonardo, Botticelli, Rousseau, Turner, Cotman and Gaugin â to name only six. Shostakovichâs Symphony 5 served almost as a template with the music for parts of myÂ fantasy novel Anackire (Vol.2 of the Stormlord Trilogy); Prokofievâs Romeo and Juliet ballet music triggered Sung in Shadow and his ballet music for Cinderella my story When the Clock Strikes in the collection Red as Blood. There are many other examples. Direct connection of paintings to my work is less frequent â though there is the story Magritteâs Secret Agent â anybody whoâs read the one and seen the other will need no further explanation.

Â Dr Angela: How did you come to write for Blakeâs 7? The series has one of the most amazingly wicked anti-heroines ever, Servalan …

The producers contacted me and invited me to write for the series. I was delighted, having

watched every episode and enjoyed it. I wanted to develop and investigate each character through one or two episodes; I started with Cally and Avon and moved on to Servalan. (The series closed before I could attempt the others, alas.) Not only of course is Servalan an arch-villainess, but eye-blindingly beautiful, since played by the radiant Jacqueline Pearce. Iâd admired Jacqueline ever since seeing her in the two cult Hammer horror movies, Plague of the Zombies and The Reptile, not to mention in Shakespeare â sheâs a wonderful actress, of course. Like the others, she more than did justice to my script (Sand). She and I still keep in touch.

Dr Lisa: You write across genres and for readers of all ages â are there any subjects, themes, concepts you havenât yet written but are eager to explore? Or do you launch into projects as soon as intriguing ideas capture your imagination?

Probably there are a lot of new venues lying in wait. I didnât, for example, start to write âordinaryâ contemporary novels until I was in my latest 40âs, (these books are easily as weird â or much weirder â than my fantasy.) The same with the Lesbian and gay fiction that began to present itself around the same time. Iâd truly like to attempt another historical novel, this time set in Ancient Rome (I have essayed one or two short tales there â e.g. Persian Eyes), but Iâve no notion when. Iâd also enjoy the research â I was fascinated when delving into the French Revolution of 1789-94. But fresh scenarios are always grabbing me.

Dr Angela: You are very prolific and you speak on an Orbital panel in 2008 about how when you approach publishers you go in not only with a story brief/synopsis/plot outline, but also with a sample cover, so they can get an idea of the âfull packageâ. Has this approached helped over the years, do you think?

In fact Iâve only done that in fairly recent times,Â  since my husband (writer/artist John Kaiine) sometimes does the artwork and design for my covers. With some people the visual aspect has engaged them. A few others have been offhand. In any case itâs less a selling point than a tempting inspiration to me, which I now and then let others in on. In the beginning, and up until the 90âs, I could normally sell my books unseen and synopsis-less, because publishers/editors approached me and asked me if I would like to work with them. Later, things became more strict (and to me â more restrictive â I canât work at stuff that doesnât interest me, nor do I want to.) With the so-called credit crunch the âBigâ houses apparently lost any wish for my work. As one door closed â another door

Dr Lisa: What are you working on now? What can readers expect to see next?

At the moment â Nothing. Iâm enduring one of those frustrating periods I term Interruptions By Life, when for one reason or another physically working at writing is made impossible. Hopefully things will resolve before the year ends â then visualise, if you will, Lee, at her Maddest and most delightedly enthused, scribbling (I always write them long-hand) at a rate of obsessive knots, morning, noon and â doubtless- night. I canât wait.

The next âprojectâ is almost certainly to be a novel in my contemporary novel Â Â series, The Colouring Books (each one has a colour in the title.) This one is called Turquoiselle, and the hero is known as Carver. I know a small amount about his (very odd) life, but the rest will only be revealed to me once I can get back to work.

The next published works will be Cruel Pink from Immanion, UK. FatalÂ

Women (a reprint with some new material) from Lethe, USA. And the reprint of Deliriumâs Mistress from Norilana , USA .

6 Responses to Happy New Year from the Lair of the Evil Drs Brain + Tanith Lee!