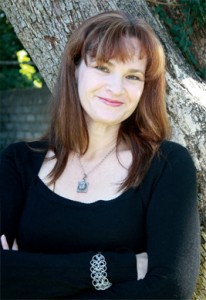 Angela Slatter is … well, me. Here I ramble on about my Horrorology novella, “Ripper”.

Well, it had a bit of a convoluted beginning: I was writing the story under another title for another publisher and when I got to the end I thought âIt doesnât precisely fit.â Steve Jones wrote to me in the meantime, with the Horrorology pitch and I thought âIt does precisely fit there.â So the novella was re-titled âRipperâ and went to a new home (rest assured, the other publisher has been furnished with an equally lovely novella … of course, when I say ‘lovely’, I mean ‘creepy’).

The inspiration was, fairly obviously, the Jack the Ripper murders. As a policemanâs child with deep, dark interests this was naturally the sort of historical event that caught my attention (and the Yorkshire Ripper later on). Iâd read Kim Newmanâs âRed Reignâ as a teenager and I think thereâs an element of homage in âRipperâ. There are so many theories about this serial killer, and thereâve been so many stories about him/her, it was hard to find my way to adding to the literature â or rather feeling I had an idea that would do justice to everything thatâs gone before. I think I got it right.

Thatâs really awfully hard. Maybe The Wolves of Willoughby Chase by Joan Aiken? Or perhaps A Wrinkle in Time by Madeleine L’Engle? I read a lot of MR Jamesâ ghost stories as a child in various anthologies, so perhaps something by him. I do remember reading âThe Towerâ by Marghanita Laski in high school and being seized by the idea that maybe it was something I could do â the desire to write and the idea that I could write were definitely two separate moments.

It does seem to be … or at least Iâve washed up here. I started out in fairy tales (actually, I started out writing chick lit, but donât tell anyone), and I really feel that fairy and folk tales are the ancestors of horror. Think about it: your mother sends you off to starve in the forest; your father wants to marry you; you are forced to wear red hot iron shoes and dance yourself to death; youâre punished for being vain by being given a pair of dancing shoes you canât take off so you ask someone to cut off your feet to save you … I rest my case.

The darkness has always been more interesting to me as a source of tales.

Youâre offered the chance to visit the Library of the Damned â do you accept?

Is there cake? Or donuts? And coffee, good coffee … actually that would be the absolute embodiment of damned: gluten-free cake, stale donuts and cold instant coffee. And probably a very strict librarian shushing you every time you complained. I think Lisa Tuttle was right about checking TripAdvisor first.