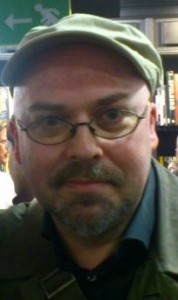 Mark Samuels (born 1967) is the author of five short story collections: The White Hands and Other Weird Tales (Tartarus Press 2003), Black Altars (Rainfall Books 2003), Glyphotech & Other Macabre Processes (PS Publishing 2008), The Man who Collected Machen & Other Stories (Chomu Press 2011) and Written In Darkness (Egaeus Press 2014) as well as the short novel The Face of Twilight (PS Publishing 2006). His tales have appeared in many prestigious anthologies on both sides of the Atlantic including The Mammoth Book of Best New Horror , Yearâs Best Fantasy and Horror , The Weird , and A Mountain Walks.

The tale is a satire on the advance of internet technology accelerating the decay of complex human reasoning. With the rise of online tools like twitter, facebook, etc. etc., one finds, in order to communicate with a mass audience, participants limit their ideas to slogans, advertising, sound-bites, and the dictates of peer pressure. Moreover, in order to communicate â other than very briefly at the level of a truncated mass shouting match! â civilly, interactions within the system require certain shared and often unexamined philosophical and political assumptions. âDecayâ also satirises the current fad of believing that human level sentience is a simply a matter of achieving, in a machine, either a high enough degree of brute computational power and/or the requisite algorithmic programming.

I can’t recall that there was a single story that made me determined to become a dedicated writer. I do remember certain tales that impressed me in my early teens, mainly the Sherlock Holmes series of detection adventures and macabre tales by Poe and Lovecraft. Back in the 1980s, it was a case of undergoing something like an apprenticeship within the fanzines and honing one’s craft. I garnered a large number of (very justified) rejection slips at the time. It was during a later period, during the mid 1990s, that my reading in all forms of literature expanded dramatically, and my own efforts began to improve. Though my first published story was in 1988, I don’t believe I considered actually self-identifying primarily as a writer, even of the very obscure and almost âundergroundâ type I am now, until quite recently.

I don’t sit down at my laptop thinking ânow to write another horror tale (heh, heh, heh)â. I think my imagination tends to be stimulated and to operate along certain thematic lines and that the sense of the profound mystery behind existence itself is what really fires my imagination into life.

You’re offered the chance to visit the Library of the Damned – do you accept?

The future of horror is â¦ ?

One usually gets two types of responses to this. Here goes:

The first is along the lines of a request (very often, and most vocally, from old white males themselves) that greater inclusiveness is the future, that a higher proportion of female and minority writers must be afforded greater exposure. Personally, I think true equality consists of treating everyone on the same artistic basis, not a quota basis, and the final criterion for acceptance should be the actual quality of the fiction submitted, not gender, not ethnicity, not disability and not any other factor. What matters is the imagination and the skill of an author in telling a tale. Nothing else. I certainly do not subscribe to the view that individual old white men are, for any reason, more intrinsically capable of writing quality horror fiction than individuals drawn from any other category in society. But the idea that extrinsic political considerations be the benchmark for judging a work of fictional composition is, I contend, a species of patronisation.

The second common response is along different lines. Horror has entrenched itself into the movies and the vast majority of people no longer read books anyway. Successful (I mean highly commercially successful) horror authors had either better write a novel that can be turned into a Hollywood blockbuster film or else produce a body of work that can be utilised as a movie franchise. It’s not a vision that inspires me in the slightest. The other thing to bear in mind, and it was a staple view in the 1990s and the 2000s â but, it seems has finally, and mercifully, died off â is that there will be no return to the likes of the âhorror boomâ of the 1970s and 1980s in publishing. The decline of literacy has advanced to such a degree that the days of such cycles in publishing are over. The end was in sight when conglomerates took over all the smaller publishing houses that used to proliferate. Now the small press, with one or two notable exceptions, is all that remains for those who might once have been mid-list mass market authors of horror story collections (not anthologies) or novels that are not the size of a brick.

My own view is this: writers will continue, in the future, to work in this continuum of fictional composition (parts of which have been labelled âhorrorâ or âweirdâ etc. for quite some decades now) as they have always done. No single author, no matter how masterful, is the summation of that continuum. And the label itself certainly isn’t important except for outside factors not connected with literary artistry, like commercial marketing. Ideally, the impetus for the author to engage in that continuum should come from within, and not from without.