Writing horror under the name of Michael Marshall SmithÂ and thrillers as Michael Marshall, MMS has produced a slew of best sellers, including The Straw Men and The Lonely Dead. Heâs won awards for co-writing and performing two series of BBC Radio 4âs cult show And Now, In Colour, is a five-time winner of the British Fantasy Award, and has multiple nominations for the World Fantasy Award. His first novel, Only Forward, won both the August Derleth and Philip K. Dick awards, and his short fiction has been collected in What You Make It and the winner of the International Horror Guild Award, More Tomorrow And Other Stories (2003), which, when translated into French, also won the Prix Bob Morane (2009). His second novel Spares was translated into seventeen languages and optioned by DreamWorks; The Straw Men is being released as a comic series; The Intruders became a TV series for BBC America starring John Simm and Mira Sorvino.

The story arrived in two parts. The first page or two dropped into my head from nowhere, prompted by re-reading ZEN AND THE ART OF MOTORCYCLE MAINTENANCE for the first time in about thirty years. I had a clear visual image of a man, and his life, but no idea What Happened Next. So I set it aside, for about two yearsâ¦ until I looked at it again â prompted, as so often, by a timely request for a story from Steve â and realized the answer was already there in front of me.

The very first stories that interested me in the idea of writing fiction were the âOf Adventureâ series written by Enid Blyton, which I loved when I was a kid. I remember starting something along those lines when I was about twelve, but quickly running out of steam. The book that really pushed me over the edge was THE TALISMAN, by Stephen King and Peter Straub. A friend of mine badgered me into reading it â Iâd read nothing by King or Straub at the time, and very little âhorrorâ of any kind â and before Iâd even finished the book I knew this was the kind of thing I wanted to do with my life. 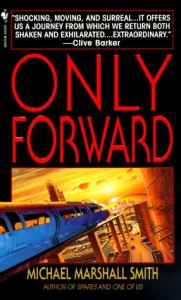 Horror is the home I keep coming back to, after time spent wandering around other types of fiction. Itâs what first started me writing, and I think itâs the broadest church of all the genres â a flavour you can add, as much as a type of story.

Yes, obviously. How could you not?

The same as the past. Good stories, told well. Anything else is a fad that will pass.