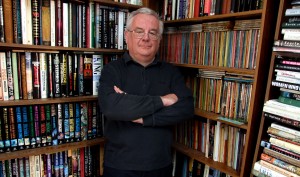 What can one say about Master Ramsey Campbell that truly shows the extent of his influence in the genre, not to mention the breadth of his talent? A poor attempt might go thusly:

The Inhabitant of the Lake and Less Welcome Tenants, his first collection was published in 1964 by the Arkham House imprint. His novels have included The Doll Who Ate His Mother, The Hungry Moon, and The Darkest Part of the Woods. His short fiction has been collected in Waking Nightmares, Alone with the Horrors, Just Behind You, and Told by the Dead. He has edited myriad anthologies, including Uncanny Banquet, New Tales of the Cthulhu Mythos, and Gathering the Bones: Original Stories from the Worldâs Masters of Horror with Dennis Etchison and Jack Dann.

He is not only a writer but a film reviewer and a multi-award winner: multiple World Fantasy, British Fantasy and Bram Stoker Awards, the World Horror Convention Grand Master Award, the Horror Writersâ Association Lifetime Achievement Award, the Howie Award of the H.P. Lovecraft Film Festival for Lifetime Achievement, and the International Horror Guildâs Living Legend Award.

As many of my tales do, it originated in an everyday setting that suddenly took on a darker aspect, at least in my head. The setting was a bunch of recently built streets â a suburb off the Wirral Way, a nature trail we often walk along. The notion of being lost in a mundane suburb that begins to prove worse than unhelpful occurred to me, and I took some of the elements the place included, not least the lost pet posters, a common sight these days. In the writing the tale left behind some of the developments Iâd meant to include, and there may be enough of them to make up a separate story in time.

I canât identify just one, Iâm afraid. I was reading from an unnervingly early age â Hans Andersen and George Macdonald before I was five, Edith Wharton and M. R. James (both in Fifty Years of Ghost Stories) by the age of six, âThe Colour out of Spaceâ at sevenâ¦ All these must have spurred me in their different ways, but as far as I can see the first thing based on a recognisable source that I wrote (when I was around seven) was the start of a science fiction novel called Dogs in the Stratosphere and mercifully unfinished â lost as well. It derived from Clifford Simakâs City, then a favourite novel of mine, but he should in no way be blamed for my grisly imitation.

Iâm guessing you already know the answer. Let me quote myself from elsewhere.

Thatâs how I introduce myself at readings and on panels, and I should have thought it was straightforward enough to be uncontentious. Perhaps not, because my saying so at a British Fantasy Convention offended a splattery writer, apparently for presuming to claim a name rather than because he found my fiction insufficiently horrible for his taste. Nevertheless Iâll continue to announce myself that way, in conversation too if the opportunity arises. I quite enjoy being told that people donât like horror, which they donât read (a situation that prompts me to ponder how they can know). Sometimes they even tell me that they donât like the sort of thing I write, although they havenât read it. On occasion they approach me to let me know as much. Admittedly the sort of fun this affords is limited, and I think thereâs a better reason for me to keep up the image. I believe Iâm in a minority of writers who say that they write horror.

Some of those who made their name with it seem eager to show theyâve moved on. SomeÂ

might even like to convince us that they never entered the field, and seek to erase all traces of their presence as they flee the scene of the crime. I wonât be doing either. Perhaps I was lucky to encounter the classics of the genre first â anything that found its way between hard covers and into the public library â but Iâve never faltered in my conviction that horror is a branch of literature, however much of it lets that tradition down. I started writing horror in an attempt to pay back some of the pleasure the field has given me, and I havenât by any means finished. I donât expect to choose to, ever.

Iâll just add that when Liverpool John Moores University gave me an honorary fellowship for (their phrase) âoutstanding services to literatureâ, I said at the beginning of my speech that I would like to accept the honour on behalf of my field as well.

If it contains books, by all means.

As vital as ever, Iâm quite sure. Whenever the field is declared dead (and indeed, at other times as well) it produces new talents.