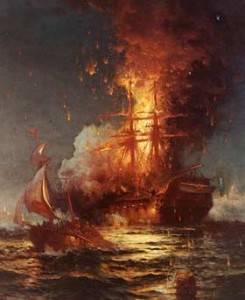 … is almost gone, thank heavens. Coupled with the last of the rotten cold I had at WFC, it has made the past few days a nasty blur. But I’ve not had any nanna naps in the afternoon for the last two days and the coughing is dying down and, most importantly, I’ve got the urge to write again. I edited a novella yesterday and sent it off for a super sekret project, and I did my progress report for the Queensland Writers Fellowship. Now I’m back on The Tallow-Wife and Other Tales.

A burning brand of a woman, she scampers up her makeshift ladder, and scrambles out onto the deck, which is beginning to tilt. The flames on her shoulder are eating, eating, eating at the rose tattoo that was put there to show her as a thief, a sneak, a convict. They scorch like the acid that was used to etch the design there in the first place. She bats at them, her eyes taking in the swaying masts, the last of the dirty canvas sails, that are orange then black, then crumble away in the wind. She wheels and turns like a dancing doll, out of control, turning in a decaying spiral that finally sees her at the rails. She hits the strakes, loses her balance, and pitches headfirst over the side.

For moments she is free, she flies, the fire seems to pull away from her and her skin does not know that itâs been hurt, then the waters of Rosebury Bay meet her, hard black glass. At first she is against it, then she is through it, and finally she is lost, travelling down, down, down, further and further from the dark sky and its starry teeth. Further and further, to where dreams no longer live.

This entry was posted in News and tagged The Tallow-Wife, World Fantasy Con 2013. Bookmark the permalink.