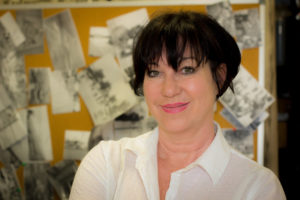 Brisneylanders! Can I suggest strongly that you head along to this on Monday 30 October?

Vicki has a wealth of knowledge and is a fascinating raconteur.

Spend an eerily illuminating night with our very special interstate guest and co-creator/co-producer/writer of the internationally acclaimed mystery series The Kettering Incident, Vicki Madden. Join Vicki as our Q&A uncovers her secrets to creating, pitching and writing and establishing herself as a top talent both in Australia and overseas.

Vicki Madden is a Producer, Writer and Showrunner with over 20 years experience both in Australia and overseas. She has worked as Writer and Showrunner on such shows as Halifax fp, The BillÂ (UK), Trial & Retribution (UK), The Clinic (Ireland), Water Rats and K9 (UK) to name a few. She was also the writer of the 90-minute true crime telemovie for the 9 Network and Playmaker media Blood Brothers.

Donât miss this chance to meet and get invaluable advice from one of Australiaâs most exciting and acclaimed writers and showrunners.

Conversation and Q&A followed by networking/social drinks with local writers, directors, producers and other members of the Queensland film and television industry â all at the Waterloo Hotel (centrally located and with parking.)Â #awgqld