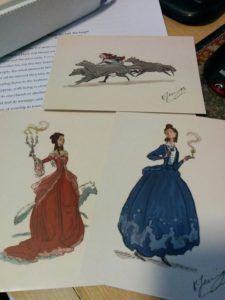 Like Blackwater it’s a gothic fantasy set in the Sourdough/Bitterwood world, and I’m at the stage where I love it. It’s new and pretty and we’re in our honeymoon period.

Just before I entered beneath the archway, I glanced over my shoulder, at the lawn and gardens across which I had come. Lightning flashed yet again and lit up the grounds, silvering a strange hunched silhouette back up on the curve of the drive, and I thought of … something. Something large but of indeterminate shape, something I could not quite place, nor did its colour even remain in my memory; there was only the recollection of red eyes. Resolute, though shivering with more than cold, I crossed the threshold.

âMiss Todd,â said the man with certainty; no surprise, really, unless the Hall was frequented by random young women on a daily basis. He waved his hands as if doing so might squeeze the moisture from my thin jacket and thick skirt. I caught sight of my reflection in the enormous mirror that was the centrepiece of a rosewood hall stand. My tiny green silk hat appeared to have melted, and I could feel the extra weight of the rain in the thick braided bun of my mousy hair. It would take hours to dry. My face was pale and I appeared, ghostly, although Iâd never felt so triumphant in my life. I glanced away before I could examine too closely the look in my own eyes, and blinked, held the closure for a few moments to compose myself so the man could not see it either.

This entry was posted in fairy tales, News, On Writing: The Novel, Uncategorized and tagged angela slatter, Blackwater, fairytales, gothic fantasy, horror, Morwood, sourdough and other stories, the bitterwood bible and other recountings. Bookmark the permalink.