One Life, No Respawns: Tom Dullemond 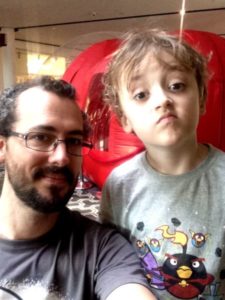 Tom Dullemond stumbled out of university with a double degree in Medieval/Renaissance studies and Software Engineering. One of these degrees got him a job and he has been writing and working in IT ever since. Tom writes primarily short fiction across all genres, including literary fiction and the occasional poem. He co-authored The Machine Who Was Also a Boy, the first in a series of philosophical fantasy adventures for middle-grade students, and has short fiction published in a handful of anthologies and magazines including Suspended in Dusk, Danse Macabre and Betwixt Magazine. He is the co-creator of Literarium, an online writing management portal.

1.What inspired your At the Edge story?

I was walking across a railway bridge with my young autistic son, and he was getting quite excited by the train, so I told him never to run in front of a train because that would be dangerous. He replied, ‘That’s ok dad, I’ll just respawn,” with all the certainy of a modern gamer. My reply was a firm, “No, you’ll be dead and I’ll be sad. You don’t respawn: one life, no respawns.” And that title spoke to me and worked its way into that notion of futuristic military, gamification, and then naturally to the question of how we neglect the particular needs of ex-military people.

The chance to work with Lee and Dan OBVS. But also the breadth of the theme.

I love that they have to be efficient, that they demand focus and refinement in a way that is very different from the demands of a longer, more leisurely piece of work. I like that I can write about different ideas and plots and people and experiences without having to dedicate months or years of my life to a single project

Europe has a rich comic book culture that is completely different to the US-centric super hero style comic scene. Reading European comic magazines as a child inspired me, particularly visual fantasy series like ‘Douwe Dabbert’ (which no one outside of the Netherlands/Belgium/France will ever have heard of). The narrative elements of early Disney feature-length cartoons have stuck with me too. I try to capture a lot of those visceral, visual elements of animation in my short fiction.

This entry was posted in News and tagged At the Edge, Dan Rabarts, Lee Murray, Paper Road Press, Tom Dullemond. Bookmark the permalink.