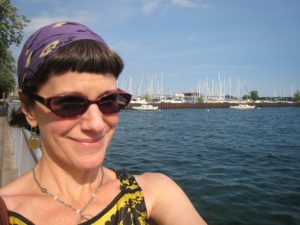 It was born from an embryonic essay I wrote last spring speculating about what I would take to the curb for junk week. (We have an event in our town every year: you can drag just about anything to the curb and either another resident will harvest it or the garbage service will take it to the dump.) From the typed printout of the essay draft, I copied the words onto paper, writing longhand, using a kick-ass magical process inspired by the incomparable Lynda Barry (which I blogged about here). I allowed myself to veer from the original essay, transforming it into fiction. I do come from a lineage of packrats, though, which made writing this piece both creative and cathartic. (p.s. There truly was a dead canary in a family memberâs freezer.)

Iâve wanted to be a writer since before I could read. Maybe Dr. Seuss was where it started. Horton Hears a Who. When I was seven, I wrote a story called The Hole in the Shirt. I dictated it to my father, and illustrated it. We mimeographed copies and sold them at the local sidewalk sale for .35 cents each. This was in 1974.

Our addiction to devices and social media. We are losing important chunks of our humanity. For instance, there is a bunch of research on the brain and how and why handwriting is important. I donât want to lose handwriting. If we practice, maybe we wonât.

May that never happen, because Iâm always discovering new books I canât live without. But for now: Peter and Wendy by J.M. Barrie; In The Skin of a Lion by Michael Ondaatje; Down and Out In Paris and London by George Orwell; The Year of Magical Thinking by Joan Didion; and Syllabus by Lynda Barry.

Iâm polishing a novel full of wonder and invention, where the machines that make our dreams are assembled from meat and stardust. Everyoneâs an orphan at The Eight Mile Suspended Carnivalâby choice or circumstances. Everyone needs a home. The novel will trot out to seek publication shortly. Iâm always working on some short essay or other, but the next big project will be another novel, which might or might not be loosely inspired by Stella Gibbonsâ Cold Comfort Farm.

This entry was posted in News and tagged Cold Comfort Farm, Michael Kelly, Peter and Wendy by J.M. Barrie; In The Skin of a Lion by Michael Ondaatje; Down and Out In Paris and London by George Orwell; The Year of Magical Thinking by Joan Didion; and Syllabus by Lynda Barry, Rebecca Kuder, Shadows & Tall Trees 7, The Eight Mile Suspended Carnival, Undertow Press, Yearâs Best Weird Fiction. Bookmark the permalink.