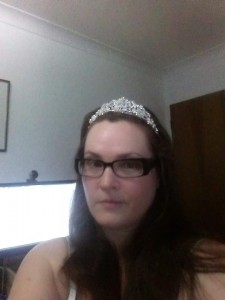 Yes, the tiara helps me write

In which I talk to myself, quite legitimately, so the Men in White Coats cannot take me away – although my Significant Other is giving me some strange sideways looks. My Spectral Book of Horror tale is “The October Widow”.

I read a lot of short fiction of the spooky variety as a child, it was the natural progression for me from fairy tales to MR Jamesâ ghost stories. Scared myself silly, lots of nights trying to fight off sleep, and of course, making sure that no foot or hand dangled off the bed lest the monsters get it. But it didnât stop me reading those sorts of stories. Iâve written about this elsewhere recently, but the story that stands out in my memory as the earliest one that made an impact was Barbara Bayntonâs âThe Chosen Vesselâ. I read this when I was about nine or ten, and we were living in a town called Longreach in the Australian Outback. It hit hard because itâs set in the kind of country that surrounded us; the droverâs wife is recognisable and the landscape and the situation were also very recognisable and relatable. It taught me one of the lessons I took away as a writer: the more familiar something is to us, the more terrifying it can be when a twist of difference is added, when we lead a reader down a path that looks familiar and then make it strange. It shakes and shifts the world beneath our feet – and that kind of frisson is why we read horror.

I had the title, which came to me one day while I was writing something else, and I had the first line, âMirabel Morgan suspected herself hunted, though sheâd caught no trace of whoever pursued herâ, so that was all I needed. I canât recall what inspired it, though, it would have been something random. Perhaps I was looking at Diana Paxsonâs The White Raven again, which starts with the wonderful opening âOn Samhain, the doorways open between the worldsâ, which is something thatâs always stuck with me as both reader and writer – it taught me the importance of a good first impression!

What was I thinking when I wrote these questions? Honestly. This is different to a lot of what I usually write in that itâs set in the present day and in a modern world, rather than the kind of dark fairy tale worlds Iâve created for collections such as Sourdough and The Bitterwood Bible. It still taps into the idea of old myths and legends, and the idea of sacrifice being necessary for progress, as well as a bit nasty; I do like to put older concepts into modern stories and see where the juxtaposition takes it.

I always come down on the side of psychological horror simply because I like subtlety in my fiction, I like the readerâs imagination to be something I can manipulate and make it do a lot of the work for me. Itâs a far more insidious technique than âOh, no, weâre heedless American teenagers whoâve hit someone with our car and we didnât try to help them because we wanted to get to our secluded lakeside cabin where we shall get drunk and make out and ARGH!!!! AN AXE THROUGH MY HEAD!!!â Although, I have nothing against a well-placed, well-considered axe to the head as long as itâs in the service of the story and not just a lazy gross-out device.