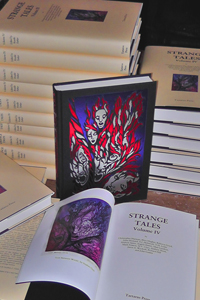 Look at what Tartarus Press have done with this glorious cover!

‘By Leaf and Thorn’ by Christopher Harman
‘The Secret Passage’ by Rhys Hughes
‘Gone to the Deep’ by Rebecca Lloyd
‘You Promised You Would Walk’ by John Howard
‘Forth’ by A.J. McIntosh
‘Preservation’ by V.H. Leslie
‘The Man Who Wore His Fatherâs Clothes’ by Andrew Apter
‘The Badger Bride’ by Angela Slatter
‘The Amber Komboloi’ by Matt Leyshon
‘For a Last Spark of the Divine’ by Mark Francis
‘The Recovery’ by H.V. Chao
‘Drowning in Air’ by Andrew Hook
‘The Homunculus in the Curio’ by Jason A. Wyckoff
‘Time’ by Richard Hill
‘The Memento Mori’ by John Gaskin