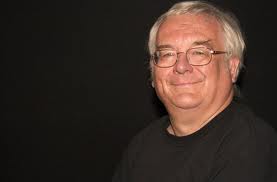 Since today is the official release day of Suspended in Dusk II, how about I let the legendary Ramsey Campbell take over the blog?

âAbove the Worldâ has its roots in an acid trip I took in the mid-seventies, when Jenny and I climbed Skiddaw above Keswick. Certain images â the view into the heart of the heather, for instance â are described pretty well as I experienced them. Other elements â the birds in the wall, for example, and the post office in the cottage â were observed later on, and all the named locations are real or were (alas, the Swan Hotel no longer exists).

Lovecraft for his sense of structure and modulation of language, which is far more varied in his work than is often appreciated. M. R James for images that show just enough to suggest far worse. Blackwood and Machen for reaching through terror towards awe. Shirley Jackson for delicacy of disquiet â restraint that adds to the power of her work. All that said, Graham Greene and Nabokov are equally crucial to my stuff.

A Dance to the Music of Time by Anthony Powell.

Misperception â the apparently innocent item or event that turns out to conceal the uncanny or the dreadful. (ââ¦and put its arms round my neckâ¦â)

Really quite a lot. The autumn will see The Way of the Worm, the final volume of my trilogy, and a new collection, By the Light of My Skull, both from PS. Centipede Press has an immense two-volume retrospective of short tales, Fearful Implications. Flame Tree will be issuing Thirteen Days by Sunset Beach and Think Yourself Lucky into the mass market, along with backlist titles. Right now Iâm working on a new novel, The Wise Friend.

The Oxford Companion to English Literature describes Ramsey Campbell as âBritainâs most respected living horror writerâ. He has been given more awards than any other writer in the field, including the Grand Master Award of the World Horror Convention, the Lifetime Achievement Award of the Horror Writers Association, the Living Legend Award of the International Horror Guild and the World Fantasy Lifetime Achievement Award. In 2015 he was made an Honorary Fellow of Liverpool John Moores University for outstanding services to literature. Among his novels are The Face That Must Die, Incarnate, Midnight Sun, The Count of Eleven, Silent Children, The Darkest Part of the Woods, The Overnight, Secret Story, The Grin of the Dark, Thieving Fear, Creatures of the Pool, The Seven Days of Cain, Ghosts Know, The Kind Folk, Think Yourself Lucky and Thirteen Days by Sunset Beach. He recently brought out his Brichester Mythos trilogy, consisting of The Searching Dead, Born to the Dark and The Way of the Worm. Needing Ghosts, The Last Revelation of Glaâaki, The Pretence and The Booking are novellas. His collections include Waking Nightmares, Alone with the Horrors, Ghosts and Grisly Things, Told by the Dead, Just Behind You, Holes for Faces, Fearful Implications and By the Light of My Skull, and his non-fiction is collected as Ramsey Campbell, Probably. Limericks of the Alarming and Phantasmal is a history of horror fiction in the form of fifty limericks. His novels The Nameless and Pact of the Fathers have been filmed in Spain, where a film of The Influence is in production. He is the President of the Society of Fantastic Films.

Ramsey Campbell lives on Merseyside with his wife Jenny. His pleasures include classical music, good food and wine, and whateverâs in that pipe. His web site is at www.ramseycampbell.com.

This entry was posted in News and tagged A Dance to the Music of Time by Anthony Powell, Blackwood, Centipede Press, Creatures of the Pool, Flame Tree, Ghosts Know, Grey Matter Press, horror, Incarnate, Midnight Sun, mr james, Press, ps publishing, Ramsey Campbell, Secret Story, Silent Children, Simon Dewar, Suspended in Dusk II, The Count of Eleven, The Darkest Part of the Woods, The Face That Must Die, The Grin of the Dark, The Kind Folk, The Overnight, The Seven Days of Cain, Thieving Fear, Think Yourself Lucky and Thirteen Days by Sunset Beach. Bookmark the permalink.