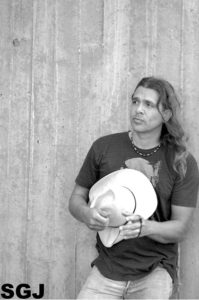 1. What was the inspiration for your SiD2 story, “Love is a Cavity I Can’t Stop Touching”?

?2. Who are your top five horror-writing inspirations?

?All five are some version of every time I turn the light off, and the darkness populates with teeth.?

?Hm. Something I haven’t read yet but want to, and could probably reread a lot and gt more each time. So . . . Alan Moore’sÂ Jerusalem, maybe.?

?Killer or monster or bad guy or whatever isn’t actually as dead as you thought.?

?Slashers, and slashers, and then some more slashers. Second slasher on the left, and straight on till morning.

Stephen Graham Jones is the author of sixteen novels, six story collections, and, so far, one comic book. Stephenâs been an NEA recipient, has won the Texas Institute of Letters Award for Fiction, the Independent Publishers Award for Multicultural Fiction, a Bram Stoker Award, four This is Horror Awards, and heâs been a finalist for the Shirley Jackson Award a few times. Heâs also made Bloody Disgustingâs Top Ten Horror Novels. Stephen lives in Boulder, Colorado.