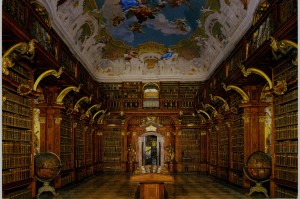 And so, I have almost finished the second last story in The Bitterwood Bible and Other Recountings. Huzzah! A bit exciting. I’ve been really lucky with the last two stories I’ve written for the collection because I knew precisely what I wanted them to do and how long I wanted them to be and exactly what needed to happen in them.

And I was supremely lucky that the stories both played along with my wishes – an unusual event, I can tell you. I am just wrapping up the end of the first draft of “Terrible As An Army with Banners”, which I want to have a similar tone to that of Eco’s narrator in The Name of the Rose, Adso of Melk (Melk Library above). It makes me a bit sad writing this story – it’s in the form of letters and a diary entry and so it feels very personal, and it also recounts the destruction of one of my favourite places I’ve ever made up, the Citadel of Books at Cwen’s Reach. Even though it’s a sad story, I still want it to sound like a battlecry.

And so, the opening of said story, just a snippet, which will be tidied up and flensed at some point:

This is written in haste for the last boat is departing soon and I will not be on it. I beg you keep safe these pages, for they record an end ? such an end, sister! such an end ? and I would have this chronicle kept safe. If you can, have it copied and sent forth so it may be found and read, and the truth of our demise – the last days of the Citadel at Cwen’s Reach – known.

Know all you who read this that it is the recounting of the last days of the Citadel at Cwen’s Reach, the home for centuries past of the Little Sisters of St Florian, and their innermost circle, the Murcianii, the blessed wanderers whose diligence and bravery have brought so many books to us and therefore prevented their loss to the world. I write this now as the end draws near ? I would that you could hear what I do as my pen scratches across the page in haste, the canons, the crackle of flames, the sound of siege engines at war ? but all you need to know of me is that I am Goda, of this order and private scrivener to Mater Dylis, who shall be our last mistress. I have served this house for almost fifteen years, at first as a postulant, then as a novice, finally as a full Sister and scribe ? but not one of the wanderers, for I was never so blest ? but I have held the position of Amanuensis for the past five years, faithfully serving as I may.

This entry was posted in News, On Writing: General and tagged Adso of Melk, Terrible as an army with banners, the bitterwood bible and other recountings, The Name of the Rose. Bookmark the permalink.