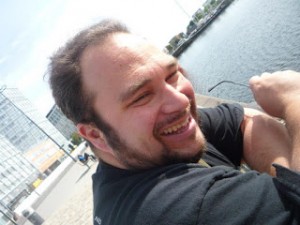 Having fled a life of soul-killing jobs (office worker, fast food operative, WP operator, training administrator, call centre worker), the very talented Mr Simon Bestwick is now spending his days doing what he loves: writing. Which is a fortunate thing for us all. Heâs published two novels, a chapbook, and three short story collections, and now takes some time out to discuss his story from The 2nd Spectral Book of Horror Stories.

What inspired your story “Horn of the Hunter”?

I could be glib and say âthe present government here in the UKââ¦ but would actually also be partly true. Iâd had the basic premise of the story in my mind for some time, but hadnât been able to decide what the âBig Badâ in it would be: first it was genetic mutants, then later a pack of hellhounds, but none of them seemed right. And then a couple of months ago, we had an election, and the Conservative Party got back in. As some non-UK readers might not know â but British readers will know all too well â their attitude towards anyone claiming welfare or state support, anyone poor or vulnerable, is one of depraved indifference at best, and outright sadism at worst. And just to put the tin lid on it, having got back into power, they announced they wanted to legalise fox-hunting â hunting animals with dogs for sport â which was banned some years ago. For me, that just sums these [TRIES TO FIND NON-OBSCENE WORD; FAILS] up for meâ¦ anyway, things came together very neatly after that.

âThe Masque Of The Red Deathâ by Edgar Allan Poe. I was very lucky when I was a small boy, because my Grandpa owned this big thick book called âA Century Of Thrillersâ, which was a compendium of great horror stories. There was stuff by Ambrose Bierce, Algernon Blackwood, Poe â no Lovecraft or M.R. James, though, oddly enough; I didnât encounter them till some years later. Wilkie Collins, Sheridan Le Fanu, and some stories by lesser known writers â there was one called âThe Lighthouse On Shivering Sandsâ by J.S. Fletcherâ¦ but âThe Masque Of The Red Deathâ was the one that actually, genuinely frightened me. Thereâs the setting, the castle, the devastation outside, thereâs the incredibly gruesome idea of the Red Death itself (to a small boy, of course, anything gory is awesome.) And then thereâs that ending, and most of all that last line: And darkness and decay and the Red Death held illimitable dominion over all. That line is The end of everything. There is no escape. It was as if the horror in the story had actually reached out from the page and touched me. It was scary, not in a sense of creepiness or pleasing terror, but in the sense of a picture of a world in which you and everything and everyone you love are annihilated.

Other stories: âThe Pondâ by Nigel Kneale, âThe Extra Passengerâ and âThe Lonesome Placeâ by August Derleth â the last one has the truly fascinating idea of a creature thatâs shaped out of fear itself â âThe Booreesâ by Dorothy K. Haynes, about these creature that live up a chimneyâ¦ Iâd better stop or Iâll be here all day.

This is a tough one, because Iâm really bad at lists â I always want to include more authors. Ramsey Campbell, because I donât think anyoneâs done as much to promote the idea of horror as a form of literature, and whoâs consistently produced so much stuff of such a high standard in the field.

Next: Ray Bradbury. Some would say heâs science fiction, not horror, but for them I have three words: The October Country. Bradbury was a genius â âThe Scytheâ, âThe Next In Lineâ, so many othersâ¦

Finally, Richard Matheson: Shock 3 blew me away â like Bradbury, heâs one of those writers who overlaps between horror and science fiction. Thatâs a provisional list, and if you ask me tomorrow Iâll have some completely different names.

More and more at the moment, and there are a lot of reasons for that. I think horrorâs a genre that kind of exists at the crossroads. Itâs at this place where fantasy, science fiction and crime fiction â and most other genres, really â overlap, and you can take what you need from the others. And some of the best work happens at that overlap.

Thereâs a story I wrote a couple of years ago called âLex Draconisâ, which is in an anthology called Tales of the Nun and Dragon. You had to write a story involving either a nun or a dragon, so I decided to put both in, and somewhere along the line the phrase ânun-on-dragon actionâ popped into my head and that story happened. Itâs not something that would ever have happened if not for that anthology, but I absolutely love the result. Itâs sort of fantasy, and itâs funny and odd and kind of a love story, and nothing like anything else Iâve done. At some point Iâd love to write more in that sort of vein. So if anyone wants to buy a copy of that anthologyâ¦ hint, hint.

Thereâs a novel coming out next year â inshallah! I canât say anything else till the contracts are signed â thatâs a mixture of horror, thriller and post-apocalyptic SF. Iâve also just finished a crime novel, but whether anything comes out of that remains to be seen.

A hell of a lot. Thereâs loads of books Iâve bought and not read â weâve just moved house, so a lot of them are still packed away â and then thereâs the stuff on the Kindle. Right now Iâm just starting on John Connollyâs The Book of Lost Things, and Iâve also got two novellas, Albion Fay by Mark Morris and Leytonstone by Stephen Volk, to hand. Also, thereâs a copy of this book bought alongside them, called The Bureau Of Them by Cate Gardner â but Iâve already read that (perk of the job) and itâs brilliant. You should all read it.

This entry was posted in News and tagged Albion Fay by Mark Morris, ales of the Nun and Dragon, Algernon Blackwood, ambrose bierce, John Connollyâs The Book of Lost Things, Leytonstone by Stephen Volk, Poe, Ramsey Campbell, Ray Bradbury, Richard Matheson, Simon Bestwick, Spectral Press, The 2nd Spectral Book of Horror Stories, The Bureau Of Them by Cate Gardner, The Lighthouse On Shivering Sand, The Masque Of The Red Death. Bookmark the permalink.