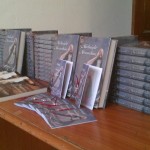 And lo, we did trek to Adelaide, City of Frog Cakes and Haighs Chocolates, and lo, we did launch a book there.

Yes, Midnight and Moonshine had a bottle of champers cracked over it in Adelaide as well as Brisbane and we can declare it well and truly out in the world.

My David and Lisaâs Chad were there to be supportive partners, photographers, acquirers of cake-cutting knives, recorders of readings, etcetera. Russ and Liz of Ticonderoga were there to sell books and talk ad infinitum about indie publishing (not to be confused with self-publishing), and be supportive publishers. And the Dynamic Duo of the Darkness, Duchess Kirstyn McDermott and Lord Jason of Nahrung were there (having driven from Melbourne â greater love hath no writerly friend) to give the official launch speeches, which were delightful, kind, heartfelt, scary, clever and, of course, had a pun in the tail. Not unlike K & J themselves. There was also the âoutingâ of the third author, LisAngela (or AngeLisa), as drawn by Kirstyn. 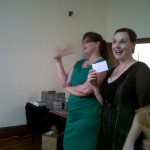 Lovely to see new and old faces joining us in the sweatbox that is the SA Writers Centre Atrium â seriously, funding bodies of SA, you canât spare a couple of grand for an air conditioning unit so people at launches donât expire of heat exhaustion??? At least get a Big Fricking Fan. By the end of the eve I was apologising to people at the singing table for sweating on their lovely new books. Lisa and I have made an executive decision to launch our books somewhere cooler â Iceland.

Thanks, Anna Solding for the photo

This launch, we had cake â yes, an awesome cakely cake with the glorious M&M cover art by Kathleen Jennings printed on the top in edible ink. Thank you to Michelâs Bakery in the Rundle Mall (and thank you to my sister Michelle, who knew that Michelâs did awesome cakely cakes like this). And I vow that any other book I launch anywhere will be accompanied by cake and not 42 dried-up slices of ciabatta.

And the trip to Adelaide was made extra special by our activities the next night: Doctors Lisa and Chadâs Engagement Party of Excellence at the wondrous Victorian-themed Apothecary. An excellent eve all-round.

David and I at the Apothecary 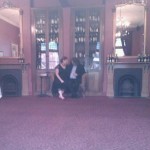 Drs Lisa and Chad at the Apothecary

Lord Jason of Nahrung at the Apothecary

The Dynamic Duo of Darkness with LisAngela