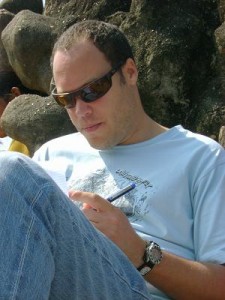 Lavieâs Tidharâs first novel The Bookman was released in 2010 by Angry Robot (back when it was a HarperCollins baby), the next one Camera Obscura will see the light of day in April 2011 (as part of Angry Robotâs newly independent incarnation). He has produced 3 novellas: An Occupation of Angels, Cloud Permutations and Gorel & The Pot-Bellied God, as well as the (rather legendary) collection of interlinked short stories, HebrewPunk. Heâs also collatborated with Nir Yaniv on novel The Tel Aviv Dossier.

1. Batman -v- a golem: discuss.
Seriously? One of my lecturers at university was nicknamed Dr. Batman by the British tabloids. He did his dissertation partly on the gay identity of Batman. Which totally doesn’t answer the question, but I always thought was kind of cool…

2. Which sale caused you to Snoopy Dance around the room?
Selling “The Dope Fiend” to Ellen Datlow at Sci Fiction, when I was starting out – especially when I realised just how much money that actually was – not so much a dance as a woah! moment.

3. What’s the worst bit of feedback you’ve ever had? Either in the sense of it being utter crap OR being so annoyingly awfully true that you wanted to eat your own head in annoyance?
I never had too many stupid rejections, but I do remember a couple of them fondly. One was for a story set in Moscow – the editor rejected it but went on to say he used to smoke Black Russians. I mean, what?

The other one had Hebrew words in it (in context) and the rejection said something like, “you use these words like I should know what they mean, yet I don’t!” It was that sort of bewildered, slightly petulant tone that really endeared it to me!

4. If I didn’t write, I would …
…cook. Maybe. I love doing it but as a job I think it would be terrible. I’d like to open a restaurant of some sort, one day. Or a sandwich place. I make a mean meatball sub!

5. Donuts or danishes?
This being Hannukah, I have no choice but to say donuts! Which, this reminds me, I should go and buy. 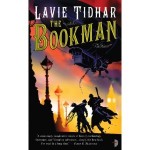 This entry was posted in Drive-by Interviews, News, On Publishing, On Writing: General, On Writing: Short Stories, On Writing: The Novel and tagged An Occupation of Angels, angry robot, Cloud Permutations and Gorel & The Pot-Bellied God, drive-by interview, harpercollins, HebrewPunk, Lavieâs Tidharâs, The Bookman, The Tel Aviv Dossier. Bookmark the permalink.