The Writer in Winter 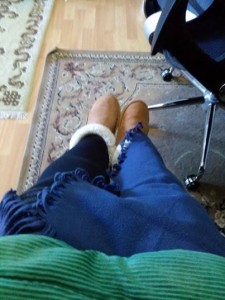 Well, mainly the writer is freezing. Queensland is not a state which concerns itself with winter overly much mostly because we’re in denial for ten months of the years that it even occurs. As a result, we don’t really insulate our houses properly, nor do we get something handy like underfloor heating. Oh, how I long for underfloor heating. So my days are generally spent wrapped up like a babushka with blankets over the top of my dax of track, sweaters and ugg boots.

The glory of working from home.

But I have managed to finish off my side quest dialogue work on Frontiers, which was an interesting though challenging experience for someone who’s never written for games before.Â  I’m now back on the novella The Witch’s Scale, for Simon Marshall-Jones’ Spectral Press – six chapters to go and I’m pretty happy with the first draft so far (a sample below). I’m working on a horror story called “Mr Underhill” which I think will go into my collection for Noose & Gibbet next year as one of the three original stories. I’m going over the galley for Black-Winged Angels, which will be out in August (limited edition hard cover print run only). I’ve got three more stories to write for the first entire draft of The Tallow-Wife and Other Tales. Lisa and I are waiting on finalising The Female Factory collection from Twelfth Planet Press. I should be able to announce a publication date for The Bitterwood Bible and Other Recountings very soon. The novel Vigil is doing the rounds, waiting for a publisher/agent to fall in love with it. 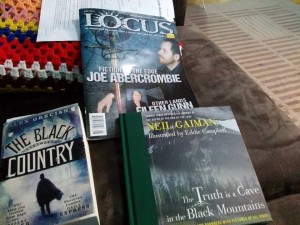 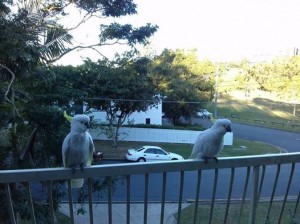 And I went into Pulp Fiction Books in their brand new shop on level 1 of the Blocksidge and Ferguson arcade in Adelaide St (GO! LOOK! SEE!) and came out quite a few shekels light than I went in. The Gaiman/Campbell book is wonderful.

And of course, these guys keep coming to visit every afternoon at around 3.

From The Witch’s Scale:

I seldom see him up this close for he will have no truck with my particular brand of skills, and I avoid him as best I can for he is one of those men who wields his money like a weapon, buying a pretty bride and keeping his sister in a state of dependence. A man whose actions sent Erika Strauss out of her wits ten years ago, ruining her business and grinding her down after she refused his initial overtures to buy the mill that had been in her family for seven generations. And she, finding herself with neither funds nor friends to help, for none would cross Karol Brautigan, saw no hope for herself or her children. When her husband was out scouring the woods for food and fuel that might keep them through the coming winter, she strangled their three small children before throwing a rope up over the beam in the kitchen, looping the noose around her neck and kicking away the stool sheâd stood on for height. Her husband, come to find his family eradicated, the house smelling of the shit and piss of death, took another rope and made a place for himself beside his wife.

Dark glances were cast at Karol for a long time after that. He increased his charity works and people accepted it, but with suspicion. âKeep an eye on both his hands,â I was told, âthe one that gives alms and the other which might be holding a rope or a knife.â This story when I first moved to Eddaâs Meadow from Haddon Maundy. He told it with shame and fear, and I wondered how many other townsfolk felt the weight of Erika Straus and her husband swinging at their necks because theyâd done nothing to help. How many prayed extra hard over their childrenâs heads at night that Karol Brautigan wouldnât get an idea in his head that would end in children with crushed windpipes and the final horror of a last image on their eyes if a mother, driven mad, bringing death to them for it seemed better than life.

This entry was posted in fairy tales, News and tagged Black-Winged Angels, Eddie Campbell, Frontiers, neil gaiman, the bitterwood bible and other recountings, The Female Factory, The Tallow-Wife adnd Other Tales, The Truth is in a Cave in the Black Mountains, The Witch's Scale, Vigil. Bookmark the permalink.

One Response to The Writer in Winter