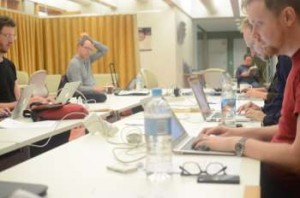 Why the f&%k can't writers follow the style sheet??

And so, a week after the action I can finally process what happened. The fact that I’m bed-ridden with the Mother of All Flus, which has taken out a fatwa on my ass, means I have the time to think and write about it in between sniffs and whimpers of self-pity.

24Hr Book. To the left, some of my fellow writers, and editor Keith Stevenson contemplating the eternal question.

I was sitting around the corner using a desktop PC – not coz I don’t play well with other children (well, I don’t, but this time it wasn’t the reason for my being banned from the sandpit), but coz I had/have a stuffed neck/shoulder and orders were that I not use a laptop. Armed with heat packs, painkiller, and my ugg boots, I set up shop in a small area, the rough equivalent of Hutt River Principality.

We started at 11am on Monday morn (11 June) with a roundtable meeting, some trembling with the terror of ‘what-have-I-done-ness’, others staring intently at our fearless leader Simon Groth for hope and inspiration, yet others wondering where the fricking Mentos were (I was promised Mentos!!). After a few minutes we all calmed down (or did convincing impersonations of calm people) and started throwing ideas around: who were our recurring characters, what pool of items/motifs might we all dip into if we chose, location, events, etc, that our tales might have in common. We knew the chances of producing a book with a single plotline and a cohesive narrative were not good (snowball, meet hell), so essentially we decided on a kind of story suite/mosaic form – our stories would have cross-overs of location and events and one particular character would appear in all nine tales, but otherwise it was no-holds-barred-let-your-writing-ninja-ramble style.

Like all true writers the moment Simon dropped the chequered flag and shouted ‘Start your laptops’, we immediately procrastinated like the professionals we are: toilet breaks, coffee-making, examining TimTam packets, heating hot packs, etc. But after five minutes or so of prepatory time-wasting, we sat down and got to work.

I’d spent some time before the project thinking about how to write a story like this and came to the conclusion that the only way was to have a character with a strong voice, because that character would tell me the story. After throwing around – and away – a few possibles, I went with Verity Fassbinder, the protagonist of ‘Brisneyland by Night’ (published in Sprawl, by Twelfth Planet Press). She’s a voice I know very well and she comes with so much innate knowledge of and thoughts about the city that I knew she’d be the perfect guide. So, while I’m also going to be working on finishing the Brisneyland novel, fans can read an in-between Verity adventure.

My hand, my sandwich

Once I had her, all the elements came together. We had a few more roundtables, to make sure we were all on track. Our editing team dropped in to see us working. We had pizza and sandwiches. Visitor Dr Lee McGowan was sent on a supplies run and came back with a bajillion packets of TimTams of various stripes – because, perhaps not surprisingly, 9 nine and 2 packets of TimTams doesn’t really work.

Rjurik Davidson finished first, then Krissy Kneen, then there was a fugue of finishing (Steven Amsterdam, Chris Currie, Nick Earls, P M Newton) that didn’t include me coz I was plodding (also, tweeting, FB’ing, talking to people who dropped in) … and there’s that tiny sense of doom in your chest, just like at school when your mum makes you take part in races and you’re not sporty and you KNOW you’re going to come last. But I shook myself and reminded myself that it wasn’t school, no one was going to give me a wedgie for coming last. And in my head was Dory singing ‘Just keep swimming, just keep swimming.’ [Anyway, I was only second last – Geoff Lemon finished last, and was NOT given a wedgie.]

I wrote until 10pm, getting down about 4665 words. Then I took the next 56 minutes to read over it and give it an edit before an editor saw it – I think I got most of the shameful mistakes out. No one wants an editor to snigger at them.

I then had a few words with Simon and Keith, which may have been ‘Blah blah blah, blah blah zzzzzzzzzzzzzzzzzzzz’, although I suspect I was not that articulate by then. And so, home to bed, babbling at my Significant Other when he came to collect me, giving me a perplexed look and the words ‘I thought you’d be a lot less awake than this.’ Me: ‘Yeah, but I’m not making much sense am I?’ Him: ‘You’re right.’

Writers under the influence of Steven Amsterdam

Then next morning, the pull of my toasty warm bed was too much and I didn’t manage to get back to QWC for the final touches ceremony, and Steven Amsterdam’s longed for pyramid.

The editing team worked through the night, as did the cover designer and the typesetting was done at lightning speed. As a result, we had our lovely book, Willow Pattern, available online and printed in New York all on time.

Stats from Simon: From Monday to Wednesday, we had more than 3500 unique visits to the site (where we were posting our work in real time), and for the 24hr period when the e-version was available free, we had more than 1000 downloads. The book will soon be available in print form in Australia – for updates, see here. 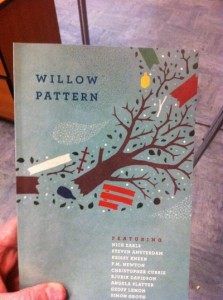 And! You can still read it for free online at Pressbooks.

AND! Dr Donna Hancox from QUT talks about digital books and our project here.