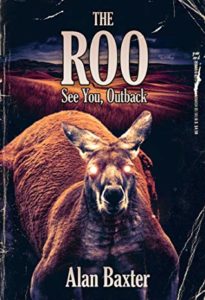 So, as part of trying to be kinder to my poor neglected blog I’m re-starting the interview series.

First cab off the rank is the inimitable Alan Baxter, who’s recently released a most excellent horror novella in the tradition of Cujo, Razorback and Rogue. A bit of gruesome fun, it’s fast-paced and essential reading for all potential tourists to Australia.

I’m a writer of horror and dark fantasy, and my writing was recently described as a “Clive Barker and Neil Gaiman cocktail, with a shot of Jack Ketchum thrown in”, and apart from being completely flattered by such a stellar comparison, I will now always use it when people ask what my writing is like! I have a back catalogue of several novels (standalone and series) and more than 80 short stories, the best of which are collected into, so far, two collections.

It began with a bizarre situation that unfolded on Twitter. There was a news article going around with the headline: âAustralian Town Terrorised By Muscular Kangaroo Attacking People And Eating Gardensâ. A more Australian story is hard to find. Then author Charles R Rutledge tweeted that it sounded âlike something Zebra Books would have published back in the dayâ. So Kealan Patrick Burke (superb author and excellent cover designer) mocked up a brilliant old school horror novel cover in response. Several of us started joking about how a cover that cool really should be on an actual book. One thing led to another, and as I was the Aussie in the conversation, people started saying I should be the one to write it. I’d been planning to write an outback horror story addressing themes of domestic violence, with a supernatural monster at the core of the yarn, but I hadn’t quite cooked that idea yet. So I decided I could use this story, which in my mind was a novella. I thought it would be a really fun creature feature. But surely, the whole concept was just nonsense. A bit of a joke. Then people kept hassling me to write it. I even got a few private messages along the lines of, âDude, please, you have to do this!â Terrible enablers, all of them. They were actually fucking serious. So I wrote it.

I had a handful of books that I read over and over as a kid – things like Charlotte’s Web, Stig of the Dump, Danny the Champion of the World, stuff like that – and I always wondered if I could ever create something that got so deeply into other people as those books got into me. I think my love of storytelling started back then. As I got older and started reading Barker, King, Dahls’ short fiction for adults, and so on, I decided I would try it too. I didn’t take writing seriously as a career until my late 20s though. But I think I’ve always had a storyteller’s heart, I used to make stuff up all the time.

Oh, there’s a bunch on my radar, actually. I’m really excited about the new Stephen Graham Jones book, The Only Good Indians. I absolutely love his stuff and can’t wait for that. I want to read the new Sarah Pinborough too, Dead To Her. I haven’t got to that one yet. The new Coleridge book by Laird Barron as well, but I’m not sure when that’s out. Corey J White has a book called Repo Virtual coming soon and I think that looks great. Argh, there’s so much good stuff!

Well, any day now there should be an announcement about a new novella coming sometime in the middle of the year. I had a novella out in 2018 called Manifest Recall that was really well received. People kept telling me they wanted more of Eli Carver’s story. Well, watch out for an announcement soon. 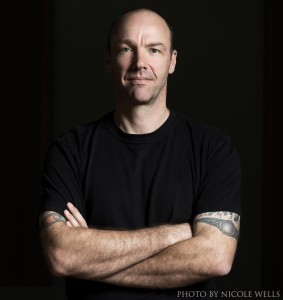 Alan Baxter is a British-Australian author who writes horror, supernatural thrillers, and dark fantasy, liberally mixed with crime and noir. He rides a motorcycle and loves his dog. He also teaches Kung Fu. He lives among dairy paddocks on the beautiful south coast of NSW, Australia, with his wife, son, dog, and a lizard. Read extracts from his novels, a novella, and short stories at his website â www.warriorscribe.com â or find him on Twitter @AlanBaxter and Facebook, and feel free to tell him what you think. About anything.