Lisette of the Raven, Ash of the Rook: Suzanne J. Willis 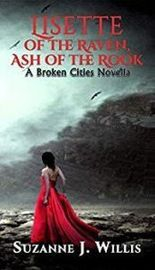 1. What do new readers need to know about Suzanne J. Willis?

Iâm a lawyer who works with the dead (in wills and estates), and loves stories that are linguistically rich, a bit dark, and occasionally nasty. My tales are firmly in the fairy tale and fantasy realm, with witches, ghosts, and all manner of fae creatures. You will occasionally find forays into post-apocalyptic worlds, and also back to the 1920s or either of the World Wars. I have had over 30 short stories published in various print and online markets, and my debut novella was released by Falstaff Books in 2019.

2. What was the inspiration for your novellaÂ Lisette of the Raven, Ash of the Rook?

Lisetteâs companion in adventure, the charcoal burner Gem, was inspired by A.A. Milneâs poem, The Charcoal Burner. It is a beautiful, slightly unsettling poem that I have loved for years. Lisette herself is one of my favourite characters â she became totally deaf as a child and her destiny changed drastically as a result. I lost my hearing in my right ear over a period of ten years or so (which, due to the amazing things that surgeons can do, has recently been completely restored), and I really wanted to write an adventure story in which the heroine is brave and bold and not wishing to be âfixedâ or âcuredâ of her deafness. Iâm quite passionate about seeing characters with âdisabilitiesâ being presented in the same types of stories as fully-abled characters. I also wanted to share some of the silent world with readers.

3. What else can we expect from your Broken Cities stories?

The lovely folks at Falstaff Books are publishing my second Broken Cities novella this year, The Scarab Children of Montague. Montague is a city that sits within the labyrinth, a city made entirely of doors that lead to all different lands, and parts of the labyrinth itself. There is an evil Queen, lost children on a quest and other children who have slowly been turned into an army of giant scarab warriors. Ultimately, it is a fairy tale about love, and loss, and the courage to carve your own path, even when the world is pulling you in an entirely different direction.

Oooh, so much in the TBR pile! Sitting on top are This is How You Lose the Time War, by Amal El-Mohtar and Max Gladstone, and The True Queen, by Zen Cho. Plus The Sky Atlas, by Edward Brooke-Hitching, for pure daydreaming pleasure. And once Iâve caught up on all the goodies from 2019, I can start on 2020!!

5. Whatâs next for Suzanne J. Willis?

I have a story forthcoming in Gallery of Curiosities, which is a reimagining of Little Red Riding Hood set in an alternate 1920s world. And another one, my first RPG tie-in fiction in an anthology by Green Ronin Publishing, set in the universe of the Blue Rose RPG.

Iâm currently working on a novella (no publisher, as yet), set in London during the Blitz, about a young woman who searches for (and finds) the Erl-King, and discovers her familyâs long connection with him and his realm.

Finally, there is an upcoming secret-squirrels project which is different to anything that Iâve worked on before, and about which I am immensely excited. So, stay tuned for the inevitable squeeing when I can announce it!

Suzanne is a Melbourne, Australia-based writer, a graduate of Clarion South and an Aurealis Awards finalist.Â Her stories have appeared in anthologies by PS Publishing, Prime Books and Falstaff Books, and in Metaphorosis, Mythic Delirium, and Lackingtonâs, among others.Â Suzanneâs tales are inspired by fairytales, ghost stories and all things strange, and she can be found online at suzannejwillis.webs.com

This entry was posted in Uncategorized and tagged Ash of the Rook, Falstaff Press, fantasy, Lisette of the Raven, SUzzane J Willis. Bookmark the permalink.