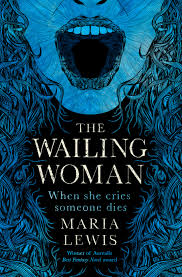 Sheâs beauty. Sheâs grace. Sheâll punch you in the face.Â

Stan Lee, Marvel Comics maestro, had this saying that you had to treat every comic book like it was someoneâs first comic book and Iâve really tried to adopt that strategy in my fantasy series. Yes, there are characters that cross over and the world structure is the same, but each book is designed to be something that new readers can jump into without having read any of the others while thereâs also treats for the dedicated reader who has been there from day one. With The Wailing Woman, I had always wanted to take a crack at banshees in terms of supernatural creature, as there really arenât that many pop cultural examples outside of DC Comics and randomly in the later seasons of Teen Wolf. All of my other books had focused on telling the stories of different types of women through the vessel of quite well-known monsters like werewolves, witches, ghosts, mermaids. Banshees were lesser known and presented a challenge because people werenât as familiar with the traits of that creature and to be fair, neither was I: there was a lot of digging through the Irish Folklore Commission and academic journals. The big thing that everyone knows about banshees is their wail, so having the central journey of the book be about a woman finding her voice and learning how to use it fit rather beautifully.Â

My three favourite films this year are: Birds Of Prey: And The Emancipation Of One Fantabulous Harley Quinn, The Invisible Man and Queen & Slim. All of those are extremely different from each other but also extremely exceptional: Iâd be very surprised if thatâs not still my ranking for best three films of 2020 by the end of the year. As for books, again, weâre swinging wildly here but Iâm a big Thomas Harris fan – he would be one of my favourite authors – and I thought Cari Mora was wonderful. I was really hungry for a new story from him and it was very different from the Hannibal books and even Black Sunday, but super thrilling and detailed. When I got to the conclusion, I cried out because I didnât expect it to end so soon as I was just tearing through it. Iâve also deeply enjoyed Alexa Martinâs Playbook Series, which is a collection of romance novels set within in and around the NFL (sheâs got an incredible voice and perspective). Plus my favourite author, Shea Serrano, put out his non-fiction film book Movies (And Other Things) which Iâm extremely jazzy about.Â

Always, although usually in ways that wouldnât obviously occur to the reader. Because I come from a background as a journalist, I tend to rely heavily on primary sources so when putting a book together research is an essential part of my process. Once I know the basic plot and shape of the novel, I can assess where my knowledge holes are and start setting up interviews with experts who work in those fields or represent specific elements so I can best depict them in the book. For instance with The Wailing Woman, there are several scenes that take place in a supernatural strip club so I interviewed several types of performers who have worked in that field for decades as well as nerdlesque performers to help craft a fictional act for a character. Sadie Burke and several characters in the book all communicate through Auslan â Australian Sign Language – Â so there was a lot of research there too as well, including learning as much as Auslan as I could so I could best describe it in prose in the novel and speaking with ASL users â American Sign Language â to better understand the intricacies between the different types of communication.Â

A nap. Maybe botox. Iâm working through some options at the moment.Â

This entry was posted in Uncategorized and tagged Auslan, irds Of Prey: And The Emancipation Of One Fantabulous Harley Quinn, Maria Lewis, Sadie Burke, Shea Serrano, The Invisible Man and Queen & Slim, The Wailing Woman, who's afraid?. Bookmark the permalink.