And Then interviews: Dan Rabarts 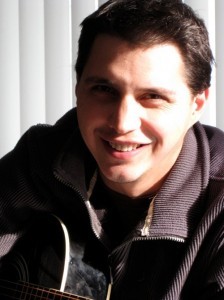 My iwi is Ngati Porou, and my father maintains our histories, our whakapapa, going back many generations. Over the years, he has been sharing these stories with me, among them the narratives that connect our family to our ancestral lands in the Coromandel. This has included discussions of how the remains of our ancestors were handled and stored, of the tapu, or respect, associated with the bones of the dead, and the sacredness of those places, and those remains. So it’s been brewing for a while, and it was only a matter of time before a story came out, mashed up with taniwha and motorbikes and nailguns.

It was nice to have an opportunity to write something with a bit more room for development than a short story without committing to a novel. Plus, it was really nice to be invited, as a Kiwi, to contribute to an Australian anthology, and lend my voice as a New Zealander to the flavour of the collection. And really, when you get asked to write a story full of adventure and excitement to appear alongside a whole raft of other rip-snorting adventure stories, how could I refuse?

Writing novellas is a different sort of challenge to short fiction or completing a novel, because while there’s more leeway in terms of word count, you still need to hold together a solid story, maintain convincing characters, and carry the tension through to the end. There’s a risk of overwriting, or trying to do too much, so writing a novella from scratch presented itself both as a chance to stretch out a bit but also as an opportunity to test my own discipline. I’ve set out to write novellas in the past and ended up with incomplete, underdeveloped novel ideas, or really long short stories, but with “Tipuna Tapu” I acheived the balance I was hoping for.

Bright. I have to say that, I’m a short story writer. But in all honesty, I believe the short story is alive and well, especially that one I have locked up in my bottom drawer and which bangs against the sides at night when it tries to get out.

This year, I focused on completing several incomplete long-form writing projects, including a dark fantasy novel and an urban horror/crime SF novel in collaboration with Lee Murray, which is currently looking for a home. I plan to make sure these are comfortably out in the wild, doing their best to make me a novelist, so then I can look at writing some more short stories. Lee and I also have an anthology of dark speculative fiction from Australia and New Zealand, At The Edge, coming out in 2016 with Paper Road Press, so the first half of next year will be dedicated to promoting that ahead of the release. Really looking forward to the book launches, since we plan to hold one in New Zealand and then another in Aussie. Watch out Australia, here we come. Again.

Dan Rabarts is a writer of fantasy novels and speculative fiction, sometime narrator of podcasts (including stories for the Hugo award-winning StarShipSofa), occasional sailor of sailing things, and father of two wee miracles in a little house on a hill, under the southern sun. In 2014 he received the Sir Julius Vogel Award for Best New Talent. Baby Teeth â Bite-sized Tales of Terror (a horror anthology co-edited with Lee Murray) also won the SJV for Best Collected Work and the Australian Shadows Award for Best Edited Work. His short stories have appeared in venues such as Beneath Ceaseless Skies, Aurealis Magazine, Andromeda Spaceways Inflight Magazine, and on the Parsec Award-winning steampunk podcast Tales from the Archives, among many others.

This entry was posted in News and tagged And Then, Andromeda Spaceways Inflight Magazine, At the Edge, aurealis magazine, Baby Teeth, beneath ceaseless skies, Clan Destine Press, Dan Rabarts, Lee Murray, lord of the rings, New Zealand, Paper Road Press, StarShipSofa, Tales from the Archives, the hobbit. Bookmark the permalink.