And Then interviews: Narrelle M. Harris 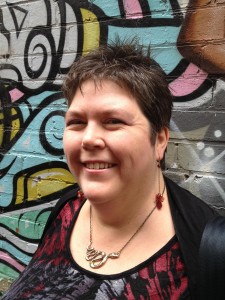 What inspired your story/novelette?
The idea of virgin sacrifices and the trope that they’re always about the slaughter of girls who haven’t yet had sex. I wanted to explore some different ideas about what it could mean, and then I wanted to marry that with the idea that sometimes, to do good, things that are not good have to be done too. I loved the idea of people who were really good guys at heart, but they had to do what looked like dark magic to achieve their goals. The magician equivalent of those who have to take out the trash.

I loved the idea of an anthology of adventure stories – stories with an Australian flavour but full of dash and derring do! Basically, I wanted to *read* it.

You can tell a solid story but keep it short and snappy – yet with enough scope for a little world building: something that might be a foundation story for a bigger world, too. It’s allowed me to experiment a bit with an idea that I might expand later.

Looking healthy. The nature of ebooks means one-shots can be sold, as well as anthologies. I think, too, with people feeling so time pressured and reading for short stints on social media, the short form is an ideal length.

I’m putting the finishing touches on a novel commissioned for UK’s Improbable Press – The Adventure of the Colonial Boy: a Holmes/Watson romance set in Australia in 1893. After that, I have a bunch of short stories I’ve promised to several markets, and then onto the third of the Gary and Lissa vampire novels, Beyond Redemption, for Clan Destine Press. I’ve got two other novels out for consideration at present too, so fingers crossed 2016 will be a busy publishing year for me.

Narrelle M Harris writes crime, horror, fantasy, non-fiction and erotica. Her books and novellas include Fly By Night, Showtime, Witch Honour and Witch Faith, Melbourne-based vampire books The Opposite of Life and Walking Shadows and an upcoming Holmes/Watson romance, The Adventure of the Colonial Boy (2016). Recent romance series include Talbott & Burns, Secret Agents, Secret Lives, and Birds of a Feather. Find out more at www.mortalwords.com.au

This entry was posted in News and tagged And Then, Clan Destine Press, Narrelle M Harris, sherlock holmes, the opposite of life. Bookmark the permalink.

One Response to And Then interviews: Narrelle M. Harris